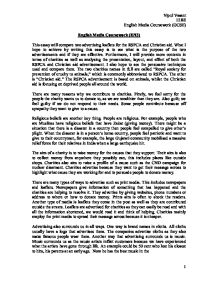 Compare two advertising leaflets for the RSPCA and Christian aid.

English Media Coursework (EN3) This essay will compare two advertising leaflets for the RSPCA and Christian aid. What I hope to achieve by writing this essay is to see what is the purpose of the two advertisements and if they are effective. Furthermore, I will provide more contexts in terms of charities as well as analysing the presentation, layout, and effect of both the RSPCA and Christian aid advertisement. I also hope to see the persuasive techniques used and compare them. The two charities names in full are called "Royal society for prevention of cruelty to animals," which is commonly abbreviated to RSPCA. The other is "Christian aid." The RSPCA advertisement is based on animals, whilst the Christian aid is focusing on deprived people all around the world. There are many reasons why we contribute to charities. Firstly, we feel sorry for the people the charity wants us to donate to, as we are wealthier than they are. Also guilt; we feel guilty if we do not respond to their needs. Some people contribute because off sympathy they want to give to a cause. Religious beliefs are another key thing. People are religious. For example, people who are Muslims have religious beliefs that have Zakat (giving money). There might be a situation that there is a disaster in a country then people feel compelled to give other's plight. When the disaster is in a person's home country, people feel patriotic and want to give to their countrymen, for example, the large Gujarati community mobilised a massive relief force for their relatives in India when a large earthquake hit. The aim of a charity is to raise money for the causes that they support. Their aim is also to collect money from anywhere they possibly can, this includes places like outside shops. Charities also aim to raise a profile of a cause such as the CND campaign for nuclear disarment. ...read more.

The form is immediate so they can do it then and then, when they are still shocked by the pictures and the information. There are two logos right at the bottom of the inside page, one is the RSPCA logo and the other is a pound symbol in a small circle cross saying government doesn't help so we should. The leaflet inside, below the form ends with a "thank you" which is in bold showing they appreciate us giving money. The point of the form is to give people the opportunity to donate money and be a member of RSPCA. Therefore, that cruelty on animals is reduced. The Christian aid advertisement shows a can of coke on the front page with "fresh" written in different followed by "air" which is in a smaller font than fresh. The reason for using "fresh air" is that Christian aid is saying that the people who are suffering survive on air alone. Below the phrase in white text, it says "dying for a drink?" this is effective as its making us think what you would do without a drink all day. On the coke can, it says "The only thing" I think this is a pun as it says "The only thing" rather than the "real thing" because some unfortunate people cannot afford water, so they will not be able to buy coke. Below the text, "The only thing" is a nutritional information box. The point of the nutritional information is to say what contributes to the water shortage, such as the way a real coke can is nutritional information contains information on what the coke is made of. It is clever because it is a playing on words. It talks about how people do not get food or water, and refers to this as "nutritional information." The inside firstly has a subheading, which is in bold black. ...read more.

This makes us imagine as if were in the same situation as them. Involvement of audience is used. "That's the difference you can make." This makes us involved in their matter. There are positive as well as negative words used. Firstly, the positive words used are "extra," "enough," "save" etc. However, there are negative words used frequently as the leaflets want to show people suffering and make us feel unhappy. Words like "dirty," "poor," "death" used to make us have sympathy on these suffering people. Looking at the text, we can see emotive language used. For example, "A child dies every 15 seconds from diseases." Using emotive language makes us emotional and really feels regretful for the people around the world. Looking at advertisements, RSPCA, and the Christian aid, I think the leaflet that is the most likely to succeed in supporting the charity is the RSPCA. This is because RSPCA have used many different types of techniques such as facts, which make us realise that this is true. My opinion is, that the RSPCA advertisement is more effective and persuasive the reason for this is that the RSPCA is laid out in such a way that would make the reader go for it and donate money. The layout inside the leaflet starts with a big picture that is persuasive as it has text around the picture. Followed by this they have clearly stated and repeated that �3 a month is what can make a difference. The RSPCA also have an order form making it an urgent leaflet that is advertising cruelty on animals. The RSPCA advertisement grabs more attention as it has used images like the cat image that creates an image in the reader's mind on how it would be like. Although I think RSPCA is better presented than the Christian aid. The Christian aid has created the similar amount of effectiveness in their reader's minds. Both leaflets have achieved to get their message across to us so we contribute to them and save more animals and human lives. ?? ?? ?? ?? Vipul Vasant 12BE English Media Coursework (GCSE) 1 ...read more.