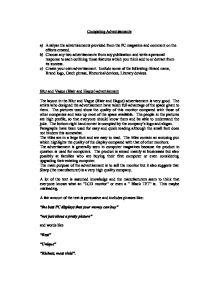 Comparing Advertisements a) Analyse the advertisements provided from the PC magazine and comment on the effects created. b) Choose any two advertisements from any publication and write a personal response to each outlining those features which you think add to or detract from its success. c) Create your own advertisement. Include some of the following: Brand name, Brand logo, Catch phrase, Rhetorical devices, Literary devices. Blur and Vague (Blair and Hague) advertisement The layout in the Blur and Vague (Blair and Hague) advertisement is very good. The artists who designed the advertisement have taken full advantage of the space given to them. The pictures used show the quality of this monitor compared with those of other companies and take up most of the space available. The people in the pictures are high profile, so that everyone should know them and be able to understand the joke. The bottom right hand corner is occupied by the company's logo and slogan. Paragraphs have been used for easy and quick reading although the small font does not hinders this somewhat. The titles are in a large font and are easy to read. ...read more.

The main purpose of this advertisement is to give the company in question some sort of recognition for its efficient IT services involving"products, services and solutions". I think that this company is mainly targeting businesses that are interested in finding the lowest prices for IT equipment. In addition this may be a company for families who are buying their first computer or upgrading and who wish to do so economically. The text uses rhetorical questions like: "Why stick to inefficient methods of sourcing IT products, services and solutions that waste your time and money?" Not only is the company asking a question, it is also referring to the picture and hoping that the subtle attempt at humour is clearer to those who missed the pun. The text is all in the centre and so focuses the reader's eyes on only the middle of the advertisement. Orders or demotic language are used to command the reader to use this company instead of any other company providing the same service. Examples of this are placed throughout the advertisement. "Type in your request online..." "Don't buy it until you acequote it." ...read more.

Interwoven in the text are the places where the product can be taken; evidently it is suitable for all terrains! The main bulk of the text (at the bottom of the advertisement) specifically tells the reader more about the product and its capabilities. Again there is slight humour involved. In the text there is a lot of persuasive language, including words like: "Amazing" "Incredibly" "Perfect" All these words help to sell the product. There is a fair amount of assumed knowledge, for example "DTS Surround Sound" "Twin wave Laser" These words may confuse the inexpert reader and so discourage a purchase. I think that this product is going to be aimed mostly at people who constantly on the move. Business men and women are a prime example of this. The advertisement would generally feature in DVD magazines or some film magazines. I don't really think that this type of advertisement would be seen in mass circulation newspapers because it is aimed at a niche market. My overall impression is that this advertisement is very successful. Bold colours make the advertisement easy to read and the several layers of humour make the reader feel relaxed and unpressurised. The advertisement is uncluttered but conveys adequate information. ...read more.