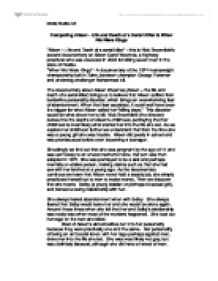 Comparing Aileen - Life and Death of a Serial Killer &amp; When We Were Kings

“Aileen – Life and Death of a serial killer” - this is Nick Broomfield's second documentary on Aileen Carol Wuornos, a highway prostitute who was executed in 2002 for killing seven men in the state of Florida.

“When We Were Kings” - A documentary of the 1974 heavyweight championship belt in Zaire, between champion George Foreman and underdog challenger Muhammad Ali.

The documentary about Aileen Wuornos (Aileen – the life and death of a serial killer) brings us to believe that Aileen suffers from borderline personality disorder, which brings an overwhelming fear of abandonment. When that fear escalated, it could well have been the trigger for what Aileen called her "killing days."  This disorder would be what drove her to kill. Nick Broomfield (the director) delves into the depths of Aileen’s childhood, portraying that her childhood is most likely what started her into the life she led. As we explore her childhood further we understand that from the time she was a young girl she was trouble.  Aileen did poorly in school and was promiscuous before even becoming a teenager.

Shockingly we find out that she was pregnant by the age of 14 and was sent away to an unwed mother’s home. Her son was then adopted in 1971. She was portrayed to be a sick and perhaps mentally un-stable person, making claims such as that she had sex with her brother at a young age. As the documentary continues we learn that Aileen never held a steady job, she simply prostituted herself out to men to make money. Then we discover that she meets   Selby (a young lesbian or perhaps bi-sexual girl), and formed a loving relationship with her.

She always feared abandonment when with Selby.  She always feared that Selby would leave her and she would be alone again.  Around these times when she felt that her and Selby’s relationship was rocky was when most of the murders happened.  She took out her rage on the men she killed.

Most of Aileen’s abnormalities run into her personality because they were practically one and the same.  Her personality of being an anti social loner, with her rage perhaps against men, drove her into the life she led.  She was most likely not gay, but was definitely bisexual, although she did have a hatred of men.

Aileen often had outbursts of rage. This was proven in the courtroom when she, on a few occasions, had snapped and screamed and swore not only at the judge, but also at the jury.  The documentary leads us through the life of Aileen Wuornos, how she once lived, and the actions that she pursued and right up to the day she was executed, this was presented to us in a start-to-finish type documentary.

The documentary about the Muhammad Ali/George Forman heavyweight "Rumble in the Jungle" boxing match is a wonderful insight into window of the past. By nature, however, it is not a motion picture of any particular depth, nor is it intended to be. Although the documentary touches on issues of racism and nationalism as necessary background elements, it does not delve far beneath the surface, this is where many would criticize the documentary, however I think it is set out what its meant to do.

When We Were Kings is not a biography type documentary of Muhammad Ali, it offers a great deal of insight into why the boxer was equally beloved and despised during his time. It's easy to forget how controversial a figure Ali was in the '60s and '70s, when he constantly proclaimed himself "the greatest” and said things like "Damn America. I live in America, but Africa's my home." He stood out to be a strong and powerful image, “Age and Parkinson's disease” have softened the man's image Spike Lee comments in the documentary, it's shocking to realize how few people understand who Muhammad Ali actually was.

Since most of the footage was shot in 1974 watching this documentary is like taking a little time trip back in time as they use a lot or archive footage throughout the documenatry. Ali and Forman appear on-screen, but only as they did around the time of the fight. Also what I found quite strange was that No interviews with either of the boxers are presented.

When We Were Kings has several good points, including footage of Ali's press conference and unsurprisingly, however, the most involving portion of the documentary is the coverage of the match. This match, which took place at 4 a.m. local time on October 30, 1974 in Kinshasa, Zaire, marked the point at which Ali's image began to change from that of anti-hero to that of hero. The “When We Were Kings” project footage was kept shelved until 1989, when Gast, along with director Taylor Hackford began working to pare down hundreds of hours of film to a reasonable length.

The Aileen Wuornos documentary and the When We Were Kings documentary are both very similar in the way that they were presented to the audience. Contrasting the Aileen documentary to the When We Were Kings I have noticed many differences and similarities, both showing reasonable amounts of archive footage to help us understand more about the past and what things looked like, also the way that they focus on telling us about each of the characters including background history, personal information etc.

The main difference between the documentaries are that in the Aileen documentary the director is being filmed himself and also interviews and gets involved, interacts with the main character (Aileen). In When We Were Kings none of this happens, all of the footage involving the characters are mainly archive footage (old filming), unlike Aileen’s footage which is mainly modern filming apart from the archive footage.