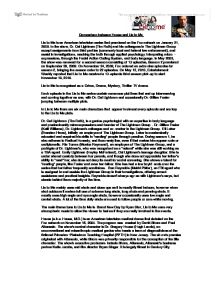 Comparison between House and Lie to Me

Comparison between House and Lie to Me Lie to Me is an American television series that premiered on the Fox network on January 21, 2009. In the show, Dr. Cal Lightman (Tim Roth) and his colleagues in The Lightman Group accept assignments from third parties (commonly local and federal law enforcement), and assist in investigations, reaching the truth through applied psychology: interpreting micro-expressions, through the Facial Action Coding System, and body language. In May 2009, the show was renewed for a second season consisting of 13 episodes, Season 2 premiered on September 28, 2009. On November 24, 2009, Fox ordered an extra nine episodes for season 2, bringing the season order to 22 episodes. On May 12, 2010, Entertainment Weekly reported that Lie to Me received a 13-episode third season pick-up to start November 10, 2010. Lie to Me is recognised as a Crime, Drama, Mystery, Thriller TV drama. Each episode in the Lie to Me series contain numerous plot lines that end up interweaving and coming together as one, with Dr. Cal Lightman and occasionally Dr. ...read more.

Ben Reynolds (Mekhi Phifer), an FBI agent who is assigned to and assists the Lightman Group in their investigations, offering armed assistance and practical insights. Reynolds doesn't always agree with Lightman's ways, but stands behind them majority of the time. Lie to Me mainly uses mid shots and close ups as it is mostly filmed indoors, however when shot outdoors it makes full use of extreme long shots, long shots and panning shots. It mostly uses high angle and eye angle shots, however occasionally uses low angle and canted shots. A lot of the time dolly shots are used to follow people or cars while moving. The main theme tune to Lie to Me is Brand New Day by Ryan Star, Lie to Me uses very atmospheric music to allow the viewer to feel as if they are really involved in the events. House (a.k.a. House, M.D.) is an American television medical drama that debuted on the Fox network on November 16, 2004. The program was created by David Shore and Paul Attanasio. The show's central character is Dr. ...read more.

Allison Cameron (Jennifer Morrison), an immunologist. Dr. Chris Taub (Peter Jacobson), a former plastic surgeon. Dr. Lawrence Kutner (Kal Penn), a sports medicine specialist. Dr. Remy "Thirteen" Hadley (Olivia Wilde), an internist. House is very similar with Lie to Me and the usage of camera angles and shots, it mainly uses mid shots and close ups as it is mostly filmed indoors, however when shot outdoors it makes use of, long shots and panning shots. It mostly uses high angle and eye angle shots, however occasionally uses low angle and canted shots. A lot of the time dolly shots are used to follow people or cars while moving. The main theme tune to House M.D. is 'Teardrop' by the group Massive Attack, as House is set in a hospital the music used is very depressing and atmospheric so the viewer can be a more a part of the plot. Overall both House M.D. and Lie to Me are very similar, the only main differences are the location, the characters and the plot lines, and however they follow the same 'rules': There is one main character, the 'boss', in House it is House, in Lie to Me it is Cal Lightman and they both have a mystery that takes a whole episode to solve. ?? ?? ?? ?? ...read more.