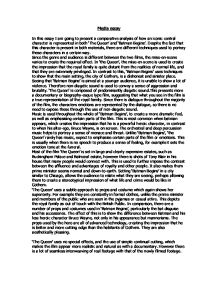 Media essay In this essay I am going to present a comparative analysis of how an iconic central character is represented in both 'The Queen' and 'Batman Begins'. Despite the fact that this character is present in both materials, there are different techniques used to portray these characters in a certain way. Since the genre and audience is different between the two films, the mise-en-scene varies to create the required effect. In 'the Queen', the mise-en-scene is used to create the impression that the royal family is quite distant from the realities of normal life, and that they are extremely privileged. In contrast to this, 'Batman Begins' uses techniques to show that the main setting, the city of Gothem, is a dishonest and sinister place. Seeing that 'Batman Begins' is aimed at a younger audience, it is unable to show a lot of violence. Therefore non-diagetic sound is used to convey a sense of aggression and brutality. 'The Queen' is composed of predominantly diagetic sound.This presents more a documentary or biography-esque type film, suggesting that what you see in the film is a true representation of the royal family. Since there is dialogue throughout the majority of the film, the characters emotions are represented by the dialogue, so there is no need to expose these through the use of non-diagetic sound. ...read more.

Also, it is unusual in the sense that it does not have opening credits, and the name of the film is not shown until the end. In place of this, the internationally recognised symbol of Batman is used. This would appeal to people who know about and have enjoyed the previous batman films and other franchise; it also shows the presumed popularity of film. The fact that the two films are extremely unalike, through their story lines and style, they appeal to different audiences. Given that 'the Queen' simply depicts the story without the use of any intriguing or special effects, it aimed at an older audience. Presumably one that already has prior knowledge, or is interested in the story behind Diana's death and her relationship with the royal family, as it spends little time explaining the background of it. Whilst 'Batman Begins' also preys on the previously aware audience, it has a clearly defined target audience due to the nature of the film. Since there have been many films, comics and TV programmes based on the character of batman, the assumption is made that the watchers will know what batman is concerned with. Owing to the action and implied violence in the film, it is evidently aimed at young adults. ...read more.

Another ideology depicted in the film is that of bourgeois, owing to the fact that the people in the city of Gotham are constantly striving to improve and acquire a higher status. Released on a smaller scale to 'Batman Begins', 'the Queen' belongs to a political genre, in the style of a documentary. However, 'Batman Begins' is taken from the fantasy sci-fi genre and has many of the expected conventions to prove this. Todorov's theory of narrative can be applied to 'the Queen' as it goes through the process of overcoming a crisis. Originally, the equilibrium is when the royal are living their lives as normal. Then arrives the disequilibrium of Diana dying, and in response the public turning against the queen due to her reaction. Finally, when the queen makes her speech she is reaccepted by the public, this is the new equilibrium. This is also applicable with 'Batman Begins' as at the beigning of the film Bruce Wayne is going through his childhood years, and we see him as part of a wealthy happy family, with is then disrupted by the murder of his parents and the downfall of the city. These are the equilibrium and disequilibrium respectively. A new equilibrium is produced when batman becomes the hero and saves Gotham city and reconstructs his house. ...read more.