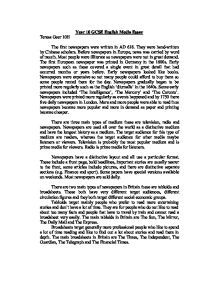 Year 10 GCSE English Media Essay Teresa Geer 10H The first newspapers were written in AD 618. They were hand-written by Chinese scholars. Before newspapers in Europe, news was carried by word of mouth. Most people were illiterate so newspapers were not in great demand. The first European newspaper was printed in Germany in the 1600s. Early newspapers such as these covered a single event in great detail that had occurred months or years before. Early newspapers looked like books. Newspapers were expensive so not many people could afford to buy them so some people rented them for the day. Newspapers gradually began to be printed more regularly such as the English 'diurnalls' in the 1640s. Some early newspapers included 'The Intelligence', 'The Mercury' and 'The Coronto'. Newspapers were printed more regularly as events happened and by 1750 there five daily newspapers in London. More and more people were able to read thus newspapers became more popular and more in demand as paper and printing became cheaper. There are three main types of medium these are television, radio and newspapers. Newspapers are used all over the world as a distinctive medium and have the longest history as a medium. The target audience for this type of medium are readers, whereas the target audience for other media maybe listeners or viewers. Television is probably the most popular medium and is prime media for viewers. Radio is prime media for listeners. Newspapers have a distinctive layout and all use a particular format. These include a front page, bold headlines, important stories are usually nearer to the front, some articles include pictures, and there are distinctive separate sections (e.g. ...read more.

The first picture is the smallest and is a photograph of a cable car alike to the one that crashed. Underneath it is captioned 'DEATH CAR: 300ft plunge' I think it uses this picture and the caption as a dark pun instead of calling it a cable car it calls it a 'death car' and basically tells the reader about the article in this one caption. Creating interest in the article and makes the reader want to read on. The second picture is the largest and shows the wreckage of the cable car. It is captioned 'DEVASTATION'. It uses this to sum up the feeling of this terrible crash in the picture adding to the emotional impact in this article. I think the article uses this picture to attract attention and interest in it and makes the reader want to find out more of what happened. The third picture is a simple cartoon of what actually happened, I think this is included so that the reader has a really clear idea of what happened and does not need to depend only on their imagination as much. The headline of this article is, '20 skiers killed as jet slices cable car wire' The writer has used the word 'skiers' to create more sympathy to the people that died as it shows that they were just innocent people on holiday who wanted to have a good time. The headline says 'killed' as to imply it was not totally accidental and could have been prevented, it also shows it was unprovoked. ...read more.

The language in this article alike to The Times is very informative and formal and contains very little emotion. 'Low-level flight training is even more problematic over densely settled Europe.' Overall this article brings up controversial political issues and doesn't concentrate on what caused it so much. It investigates why this incident occurred and shows the reaction of all the authority. I think that the agenda for this article is to show the politics of this incident and the reactions of other countries. All three of these articles have a different purpose, The Times and Newsweek both concentrate on informing their reader whereas The Mirror is trying to entertain their readers. Newsweek shows an obvious political agenda in their article about the incident and explain more about what happened after it occurred rather than what happened during it as The Mirror and Times did. This is probably due to the difference between Newspapers and Magazines. A newspapers main purpose is to report current news soon after it happens. Both newspapers printed this article a day after it happened whereas the magazine printed the article 2 weeks after the incident occurred and this gave it the ability to go into more depth about what happened, the causes of it, the effects and the consequences. Each article contained different tones and atmosphere that was created by the language. The language in The Mirror was the most colourful and attempted to create the most emotion within their audience. The Times showed the devastation by using informative and factual language. Newsweek also used very serious and informative language. Each article was about the same subject but had different effects as they appealed to different audiences and approached the incident in different ways. ...read more.