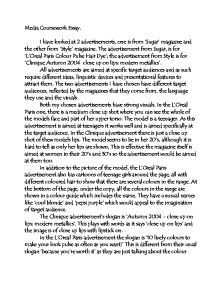 The slogan is effective because the words 'lively' and 'pulse' make it sound alive and the words 'you' and 'your' make it sound like they are talking to you in person. Also, at the end of the slogan is an exclamation mark which makes it seem exciting. The two advertisements both have copy but in the Clinique one it is much longer because it is aimed at an older target audience who are more interested in the copy content. The Advertisement aimed at the younger target audience has less copy, containing just the most important facts, because the visual impact is more to this age group. The L'Oreal Paris advertisement states that it 'washes out in 8 to 10 shampoos'. This is an example of weasel words because they are not giving an exact figure but a range. This helps advertisers avoid making untrue statements about a product, words like 'probably' and 'almost' which sound like they are not entirely certain. The Clinique advertisement uses lots of alliteration: firstly, in the slogan where it says 'modern metallics'. ...read more.

The Clinique one also has an offer written in the bottom left hand corner saying that if you buy anything from the modern metallics collection you receive '3 free deluxe custom fit samples of Clinique's 3 step skin care system'. It also contains weasel words saying 'one gift per customer, while stocks last'. This implies that if you want the offer you have to be quick because the offer could run out or if you don't get your free gift it's because they have supposedly 'run out of stock'. This means that people might go and buy the product because you get a free gift with it. This is as though they are bribing you. In my opinion the advertisement which is most effective is the L'Oreal Paris one, because it is eye catching and cheerful. But then the Clinique one would sell because it has a free gift and special offer which usually makes products sell. However, the L'Oreal Paris advertisement is presented like it is to draw the eye to it and get the readers to buy the product for what it is, not because it has a free gift with it. ...read more.