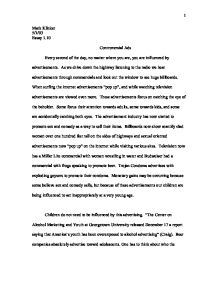 Mark Klinker 5/1/03 Essay 1.10 Controversial Ads Every second of the day, no matter where you are, you are influenced by advertisements. As we drive down the highway listening to the radio we hear advertisements through commercials and look out the window to see huge billboards. When surfing the internet advertisements "pop up", and while watching television advertisements are viewed even more. These advertisements focus on catching the eye of the beholder. Some focus their attention towards adults, some towards kids, and some are accidentally catching both eyes. The advertisement industry has now started to promote sex and comedy as a way to sell their items. Billboards now show scantily clad women over one hundred feet tall on the sides of highways and sexual oriented advertisements now "pop up" on the internet while visiting various sites. Television now has a Miller Lite commercial with women wrestling in water and Budweiser had a commercial with frogs speaking to promote beer. Trojan Condoms advertises with exploding geysers to promote their condoms. Monetary gains may be occurring because some believe sex and comedy sells, but because of these advertisements our children are being influenced to act inappropriately at a very young age. ...read more.

In 1995 the United States government received around nine and a half billion dollars in revenue from alcohol taxes.(Young) Our government should take a little bit more money out of this revenue to promote more safe drinking habits and teach more classes on why underage drinking is so hazardous. Not only is it wrong that these alcohol companies target our adolescents and the government does nothing about it, but it is wrong that these companies are influencing people's moral character. Our moral integrity is being challenged every second of the day now. As a nineteen year old male, these advertisements promoting sex are very much what I want to see. But as a nineteen year old Catholic male, with some integrity, I do not believe that women should be perceived to the public in this way and I do not need to see this. When you have women wrestling in water ripping each others' clothes off and men cheering them on, you have crossed the line in advertising. Women are not merely objects for which we compete, but are on the other hand an object of our affection. ...read more.

Some believe that a condom can protect them from the transfer of fluid. Well it does not. It is only there to reduce the risk of STD's and unwanted pregnancies. Why must we be put into these situations? There is no way to avoid them. Our life is judged in the end on how we live our lives today. The people involved in creating these horrific advertisements do not need to be destroying our chances to be judged righteously. They are condemning themselves and they do not need to condemn the lives of others. They may be looking for monetary gains, but what they need to be looking at is the effect they are having on the minds and actions of our world's youth. Every year more and more people die in alcohol related accidents due to under aged drinking, and more and more youth pregnancies and STD's are occurring. It seems that these companies, by advertising to the youth, are advertising to promote under aged drinking and sexual acts reserved for marriage. Not only does it need to stop and but these advertisements need to stop now! 1 ...read more.