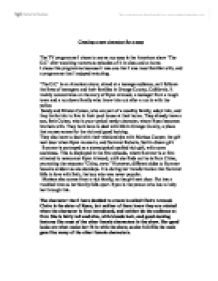 Creating a new character for a soap The TV programme I chose to use as my soap is the American show 'The O.C' after watching numerous episodes of it in class and at home. I chose this programme because it was one that I was most familiar with, and a programme that I enjoyed watching. 'The O.C' is an American show, aimed at a teenage audience, as it follows the lives of teenagers and their families in Orange County, California. It mainly concentrates on the story of Ryan Atwood, a teenager from a rough town and a run down family who throw him out after a run in with the police. Sandy and Kirsten Cohen, who are part of a wealthy family, adopt him, and they invite him to live in their pool house at their home. They already have a son, Seth Cohen, who is your typical nerdy character, whom Ryan becomes brothers with. They both have to deal with life in Orange County, a place that comes across for the rich and good looking. ...read more.

The camera shows us a shot of her writing her name on a sheet of paper as she finishes her work, and she writes the name 'Claire Atwood'. Only the audience sees this, and we instantly know that she is related to Ryan, as we know he has the same surname. I think the character would bring a lot to the show, including a sense of humour and irony. Marissa, who becomes Ryan's girlfriend, becomes jealous of Ryan's involvement with the new character as he offers to help her to do a school project. But only the audience knows that she is his sister, creating the irony and humour of the situation. The way in which she fits in, is because of her good looks. But Ryan and Seth become more and more suspicious of her, as she never lets anyone come to her house. They both follow her home one-day and discover that she is living in a trailer park. So we see that she doesn't completely fit in, as she isn't from a rich family, living in a big house like most of the other characters in Orange County. ...read more.

Jamie Parker The first scene The fist scene involving Claire Atwood very much full-fills the male gaze. We see Ryan and Seth talking near their lockers, and they are instantly struck by Claire walking down the hallway. The camera cuts to her feet walking along, and slowly pans upwards to her face, then a long shot of her walking down the corridor towards the camera. The scene is played in slow motion, not only for the male gaze, but also to emphasize the importance of the scene, and the importance of the new character that is being introduced to the program. Because of the scene, we know she is going to have some importance, and not just a one off showing of a insignificant character. Whilst this is being shown, there is fast paced music playing, But as Claire, Ryan and Seth sit down in the classroom, the music slows and becomes more mysterious. The audience knows because of this, that there is something significant and important to this character. The camera zooms into Claire's hand as she writes her name on the paper. And it is revealed to the audience that she is related to Ryan. ...read more.