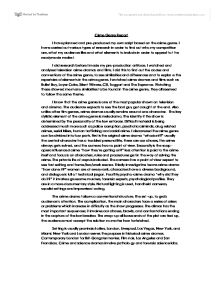 Crime Genre Report I have planned and pre-produced my own script based on the crime genre. I have carried out various types of research in order to find out who my competition are, what my audience like and what elements to include in order to appeal to the readymade market. I did research before I made my pre-production artiface. I watched and analysed television crime dramas and films. I did this to find out the codes and conventions of the crime genre, to see similarities and differences and to explore the repertoire of elements in the crime genre. I watched crime dramas and films such as Bullet Boy, Layer Cake, Silent Witness, CSI, Taggart and The Sopranos. Watching these showed me many similarities to be found in the crime genre, they all seemed to follow the same theme. I know that the crime genre is one of the most popular shown on television and cinema. The audience expects to see the bad guy get caught at the end. ...read more.

it involves gruesome murders, forensic experts, psychological profiles. They are in a more documentary style. Natural lighting is used, handheld cameras, squalid settings and improvised acting. The crime drama follows a conventional structure. The set-up, to grab audience's attention. The complication, the main characters face a series of crises or problems which increase in difficulty as the show progresses. The climax has the most important sequences; it involves car chases, brawls, and confrontations ending in the capture of the law breaker. The wrap-up all loose ends of the plot are tied up, the audience must accept the solution no matter how farfetched. Setting is usually provincial cities, London, Liverpool, Las Vegas, New York, and Miami. New York and London serves the purpose in historical crime dramas. Contemporary London for Brit-Gangster movies. Film noir, Los Angeles and San Francisco. Crime and science dramas involve pathology and forensic science labs. Characters usually found are the detective as hero, and there partner. Lawyers, pimps, prostitutes, wife/Lover/Husband of detective, and obviously the criminal. ...read more.

Fans of the crime genre provide a readymade audience and probably watch more than one show already. Websites devoted to these shows cater to such fans. I organised a focus group to find out what kind of crime drams they liked to watch. What characters did they like and plotlines. I incorporated my finding into my script, and I believe this helped a great deal. My ideal viewer is a professional male, able to drive, middle class, 40 or over, with a disposable income, he must also be sociable and active, enjoys going to pubs and bars and watches at least two hours television a night. He would be persuaded to watch my crime drama because of the realism and the fact that it's a more risk taking, factual drama compared to others shown on television at the moment. I believe my script will meet the audience's expectations, as I did a lot of research into the current competition and the popularity of the crime genre at the moment. I did a lot of research into competition, I did audience research and I set up a focus group, this all contributed to the outcome of my final script. ...read more.