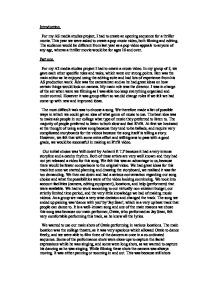 Introduction. For my AS media studies project, I had to create an opening sequence for a thriller movie. This year we were asked to create a pop music video, both filming and editing. The audience would be different from last year as a pop video appeals to anyone of any age, wheras a thriller movie would be for ages 16 and over. Part one. For my A2 media studies project I had to create a music video. In my group of 3, we gave each other specific roles and tasks, which were our strong points. Ben was the main editor as he enjoyed using the editing suite and had lots of experience from his AS production work. Jide was the cameraman and as he had great ideas on how certain things would look on camera. My main role was the director. I was in charge of the set when were we filming as I was able too keep everything organised and under control. However it was group effort so we did change roles if we felt we had come up with new and improved ideas. The most difficult task was to choose a song. We therefore made a list of possible ways in which we could get an idea of what genre of music to use. The best idea was to make ask people in our college what type of music they preferred to listen to. The majority of people preferred to listen to both slow and fast R'n'B. At first we hesitated at the thought of using a slow song because they tend to be ballads, and require very complicated storyboards for the videos because the song itself is telling a story. ...read more.

These scenes cam from his early videos such as '2 of amerikaz most wanted' and 'how do u want it'. This was to give an image of him being 'on top of the world' as he was young, rich, and famous. Viewers are instantly given the impression that he is a living a lavish lifestyle as a gangster. After his death, his record label decided it was time to show another side of the talented artist. Video directors and producers took a different approach to his music and were the major factors in rebuilding his image. This is because audiences believe everything they see, and when they saw him in his videos after his death such as 'changes' and 'until the end of time', were surprised at the dramatic change of character. This was because they used footage that was totally opposite of what they used before his death and the messages of these songs were positive which added to the impact helped portray a certain image. There are many conventions that music videos can have. As our chosen song was an R'n'B track, we wanted to use the 'urban' culture as much as we could. This included dancing, mise-en-scene, and b-boys. The singer of our track, 'Jay Sean' is actually Asian, so we had some of our extras wear traditional Asian clothes, and told our performer to do some Asian dancing. We used an effect called 'thought beats', which is where visualisations are synchronised to sounds. This term comes from come from a psychological process called synaesthesia that takes place in the brain. ...read more.

The DVD could also include special features of footage of the artist on tour and behind the scenes of making the video. We showed our video to both media studies students and other students from our college. Although the majority of feedback was positive, " It was fun to watch... seeing all that dancing made me want to get up and dance myself". There were some comments that suggested there was room for improvement, "There wasn't much of a storyline"; "it seemed quite short". We were fully aware that there was going to be some criticism and were prepared for peoples suggestions, (as if they knew any better). We were able to coma back at these criticisms, by telling the people who viewed it that the song didn't have any story so any story that we added to the video would seem out of place. After they had seen the video, we asked them if they preferred this version of the video or the original, and unsurprisingly the majority of people wanted to see our version on their T.V screens. Once the video was complete, my group including myself watched the video over and over again. I was more than happy with our work and felt proud of the effort I had put in. Although there is room for improvement, I feel this particular video has the potential to dominate charts on music video channels as well as the singles charts. I also strongly believe this video would increase the chances of the song becoming a hit, as it keeps the audiences eyes glued to the T.V, which would make them listen to the song. ...read more.