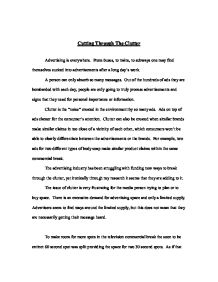 Cutting Through The Clutter

Cutting Through The Clutter Advertising is everywhere. From buses, to trains, to subways one may find themselves sucked into advertisements after a long day's work. A person can only absorb so many messages. Out of the hundreds of ads they are bombarded with each day, people are only going to truly process advertisements and signs that they need for personal importance or information. Clutter is the "noise" created in the environment by so many ads. Ads on top of ads clamor for the consumer's attention. Clutter can also be created when similar brands make similar claims in too close of a vicinity of each other, which consumers won't be able to clearly differentiate between the advertisements or the brands. ...read more.

To make room for more spots in the television commercial break the soon to be extinct 60 second spot was split providing the space for two 30 second spots. As if that does allow for enough commercial space, 15-second spots have made room for ads but also have added to the clutter. A viewer's ability to recall an advertisement goes down by about 45% in commercial breaks with seven or more spots. Advertisers can expect better consumer recall if their commercial spot is shown first, second or last. Even so, consumers become frustrated with commercials, at which point advertisers then have to compete with channel surfers and the growing trend of commercial free programming and the hundreds of channels to surf on satellite television. ...read more.

Clutter puts a strain on the creative to create advertising that stands out. Ideas need to be fresh and unique. It is only a matter of time before ideas are recycled, and consumers draw comparisons between ads that represent ideas that have already been seen before. Clutter may take the appreciation out of creative ideas. People are often so bombarded with advertising, that creative may go unnoticed and unappreciated. With all this said, it is not to say that clutter is evil, creating so many obstacles that advertising may not be worth the effort. Clutter has created an environment that requires creative strategic media planning and outstanding creative that will demand the attention of consumers no matter how many ads they have seen today. Sources Bogart, Leo. Strategy in Advertising, NTC Publishing Group. 1984 O'Guinn, Alan. Advertising 2, SouthWestern College Publishing. 1999 ...read more.