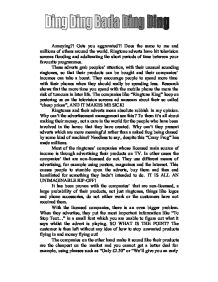 Annoying?! Gets you aggravated?! Does the same to me and millions of others around the world. Ringtone adverts have hit television screens flooding and adulterating the short periods of time between your favourite programmes. These adverts grab peoples' attention, with their unusual sounding ringtones, so that their products can be bought and their companies' incomes can take a boost. They encourage people to spend more time with their phones when they should really be spending less. Research shows that the more time you spend with the mobile phone the more the risk of tumours in later life. The companies like "Ringtone King" keep on pestering us on the television screens ad nauseam about their so called "cheap prices", AND IT MAKES ME SICK! ...read more.

In other cases the companies' that are non-licensed do not. They use different means of advertising, for example using posters, magazines and the Internet. This causes people to stumble upon the adverts, buy them and then end humiliated for something they hadn't intended to do. IT IS ALL AN UNIMAGINABLE RIP-OFF! It has been proven with the companies' that are non-licensed, a large probability of their products, not just ringtones, things like logos and phone accessories, do not either work or the customers have not received them. With the licensed companies, there is an even bigger problem. When they advertise, they put the most important information like "To Stop Text..." in a small font which you are unable to figure out what it says whilst the advert is playing. ...read more.

With companies such as "Jamster" or "Ringtones 'R' Us" it is a different matter. Oh yes they do have a helpline, but not a free one, charging up to �1 per minute nobody really wants to waste their money calling. Although this is a well thought out idea of having a helpline, it does make them a stack of cash talking to someone on the other line and not having any intention of getting off the phone quicker, which results in you spending a lot of money sorting out something which is not your fault. Next time you see a ringtone advert, turn the volume down or go make yourself a cup of tea, remembering that "Crazy Frog" is an unwanted fashion accessory which can get you into tonnes of debt. You must show disapproval otherwise you will be the "WEAKEST LINK!" Goodbye... ...read more.