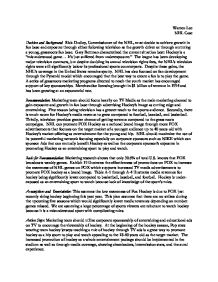 Decision and Background: Rick Dudley, Commissioner of the NHL, must decide to achieve growth in fan base and exposure through either following television as the growth driver or through nurturing a young, grassroots fan base.

Warren Lee NHL Case Decision and Background: Rick Dudley, Commissioner of the NHL, must decide to achieve growth in fan base and exposure through either following television as the growth driver or through nurturing a young, grassroots fan base. Gary Bettman characterized the current situation best: Hockey is a "misunderstood game... It's just suffered from underexposure." The league has been developing major television contracts, but despite doubling its annual television rights fees, the NHL's television rights were still significantly below its professional sports counterparts. Despite these gains, the NHL's coverage in the United States remains spotty. NHL has also focused on fan development through the Pyramid model which encouraged that the best way to create a fan is to play the game. ...read more.

Secondly, there is much room for Hockey's media revenue to grow compared to football, baseball, and basketball. Thirdly, television provides greater chance of getting revenue compared to the grass roots campaigns. NHL can promote FOX Hockey as a national brand image through more FOX advertisements that focuses on the target market of a younger audience up to 40 years old with Hockey's market offering as entertainment for the young and hip. NHL should maximize the use of its powerful marketing network focusing especially on corporate sponsors such as NIKE which can sponsor Ads that can mutually benefit Hockey as well as the corporate sponsor's exposure in promoting Hockey as an entertaining sport to play and watch. ...read more.

This plan assumes that there are no strikes during the upcoming five seasons which would significantly lower media revenues depending on number games missed. We are assuming a large percentage of sports viewers are reluctant to watch hockey because it is a misunderstood sport with complicating rules. Action Steps: Marketing team should utilize corporate sponsorship of entertaining and educational ads on TV to encourage the viewership of hockey. At the beginning of the hockey season, Pop stars wearing team hockey jerseys teaching a rule of hockey through TV ads is a great way to promote hockey as a hip sport to play and watch appealing to the 18-40 years old as the target market. The increased promotion of hockey as a whole entertainment package should be implemented in the stadium as well as through media coverage, showing cheerleaders, intermission stars, and the aural experience. ...read more.