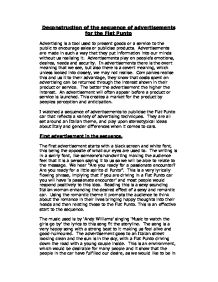 Deconstruction of the sequence of advertisements for the Fiat Punto.

Deconstruction of the sequence of advertisements for the Fiat Punto Advertising is a tool used to present goods or a service to the public to encourage sales or publicise products. Advertisements are made in such a way that they put information into our minds without us realising it. Advertisements play on people's emotions, desires, needs and security. In advertisements there is the overt meaning that we see, but also there is a covert meaning, which unless looked into closely, we may not realise. Companies realise this and us it to their advantage, they know that costs spent on advertising can be returned through the interest shown in their product or service. The better the advertisement the higher the interest. An advertisement will often appear before a product or service is launched. This creates a market for the product by peoples perception and anticipation. I watched a sequence of advertisements to publicise the Fiat Punto car that reflects a variety of advertising techniques. They are all set around an Italian theme, and play upon stereotypical ideas about Italy and gender differences when it comes to cars. First advertisement in the sequence. The first advertisement starts with a black screen and white font, this being the opposite of what our eyes are used to. The writing is in a swirly font, like someone's handwriting making the audience feel that it is a person saying it to us so we will be able to relate to the message. We hear "Are you ready for a passionate encounter? Are you ready for a little spirito di Punto". This is a very lyrically flowing phrase, implying that if you are driving in a Fiat Punto car you will have 'a passionate encounter' and most people would respond positively to this idea. Reading this is a sexy sounding Italian woman enhancing the desired effect of a sexy and romantic car. ...read more.

Again the scene changes we see the man and woman getting out of the car and walking to the exclusive restaurant in a LS (long shot). The woman then says, with a smirk on her face, "Nine o'clock. Table for two", the pair laughs advertisement finishes with a final close up of the silver car parked, for effect, against a white wall and a darker background of trees. This advertisement uses the perpetual stereotype that women can't read maps and twists the notion near the end of the narrative. This appeals to women because the woman is not only proving the man wrong but showing that she can deceive her man by taking him to the other restaurant. Their presence at a better restaurant than we first thought than the other it suggests that when they are in the Fiat Punto car they are too good for the small restaurant and that a better one is needed to live up to their status as Fiat Punto owners. When the man thinks that the couple are getting lost, despite the frustration it shows the harmony and a sense of fun the car can bring too us The audience like the man, has been tricked by a clever woman, who is really in control of the situation and the car. Fourth advertisement in the sequence This advertisement is different to the previous ones. This is because in the other advertisements for the Fiat Punto that I have deconstructed they mainly focus on what you feel like when you are driving the car but this advertisement focuses on the car itself. I think this is to give the audiences different perspectives of the car, making us feel more comfortable towards the car. We are given this idea by being shown various shots of the car from different angles and a synchronised woman's voice (used in other parts in the sequence) ...read more.

By doing this we are built up over time to think that the car is great and we learn about how good it is without the upset of finding out the price until the very end when they have been drawn towards wanting the car. We are 'sold' the image of the car. The advert starts with the car alone on its side next to a wall giving us a final picture for our minds. The slogan we have been taught to connect with the Fiat Punto, which also represents its Italian theme is said one last time. It shows "Show a little Spirito di Punto". This reminds the audience of the adverts that we have seen showing off the Fiat Punto. We are told the price the offers and the phone number and encouraged, to test-drive a car, today or really instructed by a series of imperatives. The Fiat Punto is directed towards women in these advertisements they use this idea throughout the adverts in the sequence. The advertisements always make the women look dominant to the men seeming more powerful, which would make women want to buy the car to be in that position. They do this by putting the women driving and making them take revenge or trick the man. I think this method is extremely effective, as it will appeal to most of its desired audience. We are also shown the cars ability numerous times in the sequence. Showing that the car has more to offer than just a feeling of power it is also able. We are shown this in the fifth advert where the woman drives around the mans prized possessions. We are shown that the car has style also like where the car is driven around the Italian streets with the music it gives a feeling of joyfulness showing the car to be fun as well. I think using this combination of effects works well to sell the car to its desired audience. ...read more.