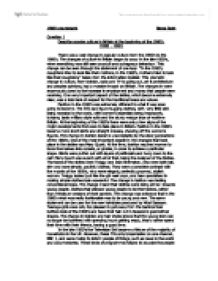 Describe popular culture in Britain at the beginning of the 1960's (1960 - 1965) There was a vast change in popular culture from the 1950's to the 1960's. The changes of culture in Britain began to occur in the late 1950's, when everything was still seen as adult and outrageous behaviour. This change can be seen through the statement of one lady: "In the 1950's, daughters tried to look like their mothers, in the 1960's, mothers tried to look like their daughters," taken from the information booklet. This dramatic change in culture, from fashion, radio and TV to going out, art & architecture and peoples opinions, had a massive impact on Britain. The changes in were enormously down to the increase in employment and money that people were receiving. One very important aspect of the sixties, which became extremely clear, was a total lack of respect for the traditional ideas and values. Fashion in the 1950's was extremely different to what it was soon going to become. The 50's saw figure hugging clothes, with very little skin being revealed to the world, with women's essentials being headscarfs, turbans, basic military style suits and the sturdy wedge shoe of wartime Britain. ...read more.

Even though Radio Luxembourg had an appalling signal teenagers still listened to it, as it was the only way for them to hear pop music. Then in 1964 Radio Caroline began broadcasting. This was a pirate radio, meaning it was a ship moored outside the British territorial waters that player non-stop pop music. Pirate Radio became very popular with the teenagers, who could hear non-stop pop music for the first time, but tremendously unpopular with the BBC and the government, who tried to have them banned. The appeal of Radio Caroline was not only the music, but also that fact that it was a radio station that was completely designed for young people. The arrangement of programmes and the presenters were completely different from anything on any other station present. Radio stations also began to set up awards for bands, meaning they are creating great publicity for themselves. There are clear differences between the two decades radio. The radio became aimed towards teenagers and was actually providing what people wanted to listen to - even if it was illegal. Radio became a much more popular feature in the 60's and the publicity for the radio increased dramatically. ...read more.

The older generation were still back in the 50's, but that didn't matter! People were more independent, and that was never going to change back. What was being shown on TV had a great part to play in these changes as youngsters were being encouraged to lead their own lives. Other things also contributed; such as the pirate radio stations - as they were illegal, it gave people the idea that it was ok to do some wrong now and again. In conclusion, the cultural change between the 1950's and the 1960's in Britain was extraordinary! It began with everyone doing as they were told, following their parents in the 1950's to a mass rebellion in the 1960's. People finally realised that it was their life, and it was up to them what they did with it. The films, TV programmes, and music that were around at the time had a huge part to play in this change, as they were largely influencing people into doing things they would never have thought of before. Overall, the changes in the 60's were positive, as it made everyone more independent and free minded, except for the older generation, who were stuck in 50's. ?? ?? ?? ?? 1960's coursework Becca Dash Question 1 ...read more.