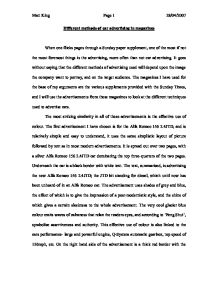 Different methods of car advertising in magazines When one flicks pages through a Sunday paper supplement, one of the most if not the most foremost things is the advertising, more often than not car advertising. It goes without saying that the different methods of advertising used will depend upon the image the company want to portray, and on the target audience. The magazines I have used for the base of my arguments are the various supplements provided with the Sunday Times, and I will use the advertisements from these magazines to look at the different techniques used to advertise cars. The most striking similarity in all of these advertisements is the effective use of colour. The first advertisement I have chosen is for the Alfa Romeo 156 2.4JTD, and is relatively simple and easy to understand, it uses the same simplistic layout of picture followed by text as in most modern advertisements. It is spread out over two pages, with a silver Alfa Romeo 156 2.4JTD car dominating the top three-quarters of the two pages. Underneath the car is a black border with white text. The text, summarised, is advertising the new Alfa Romeo 156 2.4JTD; the JTD bit standing for diesel, which until now has been unheard-of in an Alfa Romeo car. The advertisement uses shades of grey and blue, the effect of which is to give the impression of a post-modernistic style, and the shine of which gives a certain sleekness to the whole advertisement. ...read more.

The text itself is not quite as effective or thought provoking as the colour scheme, and neither does it have clever connotations. It says 'ALFA DIESEL' five times in a vertical column, and underneath that it says '(NO MATTER HOW MANY TIMES YOU SAY IT, IT STILL SOUNDS STRANGE.)'. The car is going against the stereotypical sports car and Alfa Romeo, by being a diesel and not an unleaded that does about seventeen miles to the gallon. The Saab advertisement uses text in quite an average way, with small text at the bottom. The large text underneath attempts to introduce humour to the advertisement, but unfortunately fails. The second advertisement uses text to much greater effect. Underneath the car is the text 'Saab vs. the Chocolate Bar', and below that is a reasonably sized paragraph of text explaining that if you buy a chocolate bar, you should be able to eat a chocolate bar, and that after putting it in your glove compartment it should not resemble hot chocolate. Then comes the selling point: Saab cars siphon air directly from the air conditioning system, 'maintaining a cool 42�F (5.5�C) in the glove compartment. Which means, when you're ready to eat your snack, it can still be peeled rather than poured.' The advertisement then uses this example as evidence of their extraordinary sense of attention to detail, and in their own words 'It's details like this that illustrate Saab's somewhat different approach to building cars.' ...read more.

This is much the same as the Saab advertisement. This builds on the image of Saabs as practical, high technology cars (remembering back to Saab's last advertising campaign, where they compared their cars to their aircraft) and adds in an aspect of style, relaxation and beauty. This sentence opens up another aspect of car advertising, all the cars are trying to get it into peoples minds that they already have an image of what those cars are like. At the very end of the Saab page, it simply says 'It's details like this that illustrate Saab's somewhat different approach to building cars', in which they are trying to make a name for themselves while retaining a certain comedic value. In the same way Volvo are trying to build up on the image they have tried to create in their advertising campaigns over the last years that they offer value for money family cars, and a sensible car company, which is reflected in their advert. The effects of these techniques are painstakingly thought out and rarely does an advertisement have any unintended connotations. There are three main factors that control the effectiveness of each advertisement. Firstly, the product being sold is important in choosing the advertising campaign; if you are advertising a Volvo the methods used will be completely different from an advert for a Porsche or a Ferrrari. In addition to this, the target audience intended for the product will affect the advertisement. ...read more.