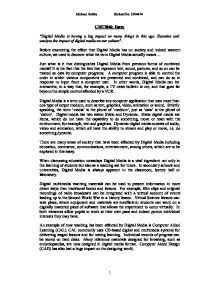 &quot;Digital Media is having a big impact on many things in this age. Examine and analyse the impact of digital media on our culture&quot;.

CMT2046: Essay "Digital Media is having a big impact on many things in this age. Examine and analyse the impact of digital media on our culture". Before examining the effect that Digital Media has on society and indeed western culture, we need to discover what the term Digital Media actually means... Just what is it that distinguishes Digital Media from previous forms of combined media? It is the fact that the bits that represent text, sound, pictures, and so on can be treated as data by computer programs. A computer program is able to control the order in which various components are presented and combined, and can do so in response to input from a computer user. In other words, Digital Media can be interactive, in a way that, for example, a TV news bulletin is not, and that goes far beyond the simple control afforded by a VCR. Digital Media is a term used to describe any computer application that uses more than one type of output medium, such as text, graphics, video, animation or sound. Strictly speaking, the term 'media' is the plural of 'medium', just as 'data' is the plural of 'datum'. Digital media has two states: Static and Dynamic. Static digital media are items, which do not have the capability to do something, move or react with the environment, for example, text and graphics. Dynamic digital media consists of audio, video and animation, which all have the ability to stream and play or move, i.e. ...read more.

This is not only the case for graphic designers but also the general trend for documentation is electronic-books or e-books. This move from a hard copy to digital format has provided the opportunity to make use of Digital Media elements such as video clips, animation and images to explain thoroughly and supplement the text. Kiosks are a further of example of Digital Media making and impact on society. Kiosks are used to provide information in public places such as museums, train stations and airports. They are usually using digital touch-screen technology. These kiosks have enabled the general public and in-particular tourists to have access to essential information at their fingertips, literally. Kiosks do have to be robust to withstand frequent use, and occasional misuse, by the general public. An example of where kiosks have had a considerable impact on society is in Toronto, where digital kiosks have been installed in shopping malls, which allow people to pay local taxes and court fines. Digital Media has allowed communications such as teleconferencing to take place. With use of a Wide-area network, including the Internet, online meetings can be carried out in real-time with the use of video and live sound. This technology can cut the considerable costs and time of travelling to meet people face-to-face. Space Invaders was the first video game to change the habits of people on a national scale. Every pub, bar and club had games machines making money...spawned whole industry of games manufacturers and the hardware to go with them so 'jumpers for goalposts' was out and Super Mario was in. ...read more.

Crime is another sector that has been widely affected by Digital Media in both positive and negative fashions. The government and police have huge databases, with images of criminals and fingerprint recognition images, which are a huge aid in collating evidence and combating criminals. The downside to this positive impact is the crimes that Digital Media has created such as Identity theft and fraudulent activities. Impact of digital media on statistics, weather forecasting (not that we can do much still to predict disasters like the recent Tsunami) and entertainment means we can now study whilst on the move, we can watch films whilst we have a meal, we can watch the news happening in a country we are just about to land in. The speed of transfer of information has transformed communication between people at work (e-mails), people at play (instant replays of contentious sporting moments), people at prayer (flat screen displays of Pope's blessings to the faithful etc.), people at leisure (the whole gamut of films, digital broadcasts of TV programmes, interactive participation in TV add-ons, the continuing evolution of games media (X-box, PS3, etc. etc.) Those detractors from digital media forms are like believers that the earth is flat- they are in denial concerning the unstoppable progress of human inventions. Culturally we maintain our classical art examples whilst embracing new technology to create artistic masterpieces in Adobe Photoshop - it is just not recognised as legitimate yet. Oscars for screensavers, the Booker Prize for databases and web pages, the Grammy's for download quality MP3's Kazaa!! The future's orange? No, the future's digital... ...read more.

*** This is a good essay, which shows a good understanding of the ways in which digital technology is impacting on contemporary culture. The essay would benefit from less anecdotal evidence when debating the benefits/disadvantages of digital technology. It needs more examples to support points.