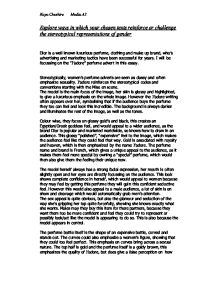 Dior is a well known luxurious perfume, clothing and make up brand, whos advertising and marketing tactics have been successful for years. I will be focussing on the Jadore perfume advert in this essay.

Dior is a well known luxurious perfume, clothing and make up brand, who’s advertising and marketing tactics have been successful for years. I will be focussing on the “J’adore” perfume advert in this essay.

The model is the main focus of the image, her skin is glossy and highlighted, to give a luxurious emphasis on the whole image. However the J’adore writing often appears over her, symbolising that if the audience buys the perfume they too can feel and look this incredible. The background is always darker and illuminates the rest of the image, as well as the tones.

Colour wise, they focus on glossy gold’s and black, this creates an Egyptian/Greek goddess feel, and would appeal to a wider audience, as the brand Dior is popular and marketed worldwide, so knows how to draw in an audience. This glossy “polished”, “expensive” feel to the image, which makes the audience feel like they could feel that way. Gold is associated with royalty and heaven, which is then emphasized by the name J’adore. The perfume name and brand is French, which gives a unique appeal to the audience, as it makes them feel more special by owning a “special” perfume, which would then also give them the feeling their unique now.

The model herself always has a strong facial expression, her mouth is often slightly open and her eyes are directly focussing on the audience. This look shows complete confidence in herself, which would appeal to women because they may feel by getting this perfume they will gain this confident seductive feel. However this would also appeal to a male audience, a lot of skin is on show and cleavage which would automatically grab men’s attention.

The sex appeal is quite obvious, but also the glamour and seduction of the way she’s gripping her top quite forcefully, showing she knows exactly what she wants. Males may they buy this item for there partners, because they want them too be more confident and feel they could try to represent or possibly look/act like the model is appearing to do so. This is also because the model appears in control.

The perfume bottle itself is the shape of an expensive bottle, curved and stands out. The curves could also emphasize a women’s figure, showing that they could too feel perfect. This emphasis on curves bring across a sexual nature. The top half is gold and the perfume itself is a goldy brown, this emphasizes the quality of J’adore, but does give a false perception on how this is sup post to make you feel amazing.  The top of the bottle has a round circular section, because of the colour and shape; it makes you think of the Greek goddess’s or Egyptian queens, so portrays that you will feel just as incredible and individual.

Women in Dior are represented as stereotypically sexy, confident and empowered. However the one thing that goes against the conventions would be the fact they are seen as strong and confident, instead of pretty and innocent like Britney spears for example in her new scent “hidden fantasy”  or Prada’s advertisement, compared to Dior or Jean Paul Gaultier, who are a lot more sexually orientated.

These adverts, although constructed for women’s items, are socially advertised for men as male objects of desire, broadening the audience this specific section was particularly aimed at. This provokes the whole male gaze theory of “visual pleasure”, and the knowing that men can look without the woman on screen knowing their watching. So overall although this theory is in some ways one sided, it does make sense for this sort of advertisement. However the female gaze could also be understood for “Dior J’adore” perfumes advertisement, because it’s women looking at someone that they could aspire to be like, or model themselves upon. Almost like a role model, but often a women they see as an image of perfection.

Overall I feel that Dior’s advertisement only reinforces the look on stereotypical gender form, by presenting a unrealistic view on perfection, pushing the boundaries of audience appeal and broadening the market by displaying women as objects of sexual desire. They’ve not gone far in improving the direction of female’s in advertisement towards a more positive side. The conventions and codes of making the women mysterious is still used, but no longer are the images aimed at making the women look quiet and shy. The common racial model is American, Or African American, also star appeal is used a lot more with famous actresses, yet again to fill gaps in the target audiences they hadn’t before.

Overall this gives women unreal expectations, as we feel we have to be slim with big breasts and well toned in order to compare to anyone else. The whole image obsession we have now taken on is truly a nightmare, because the pressure to conform to the “perfect” image is outstanding. However we mustn’t forget that the majority of celebrity’s have been photo edited and they have the money to get anything they want. I feel women shouldn’t be pressured into looking like this, as the majority of women don’t look anywhere near this incredible without make up and effect. All advertisement which has been enhanced does have a message, but should be pressured upon more with bigger informative sections about this or just stop enhancing altogether.  It’s unnatural and really effects women today.