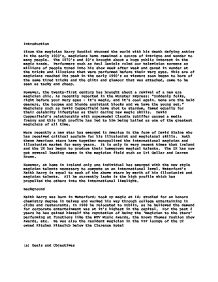 Discus the revival of a new era magician chic.

Introduction Since the magician Harry Houdini stunned the world with his death defying antics in the early 1900's, magicians have remained a source of intrigue and wonder to many people. The 1970's and 80's brought about a huge public interest in the magic trade. Performers such as Paul Daniels ruled our television screens as millions of people tuned into his show week after week and gazed in wonder at the tricks and illusions that were performed before their very eyes. This era of magicians reached its peak in the early 1990's as viewers soon began to bore of the same tired tricks and the glitz and glamour that was attached, came to be seen as tacky and cheap. However, the twenty-first century has brought about a revival of a new era magician chic. As recently reported in the Munster Express: "Suddenly folks, right before your very eyes - it's magic, and it's cool again. Gone are the bald geezers, the toupee and blonde assistant blocks and we have the young set." Magicians such as David Copperfield have shot to stardom, famed equally for their celebrity lifestyles as their daring new magic skills. David Copperfield's relationship with supermodel Claudia Schiffer caused a media frenzy and this high profile has led to him being hailed as one of the greatest magicians of all time. More recently a new star has emerged in America in the form of David Blaine who has received critical acclaim for his illusionist and magicianal skills. Both these American stars have together monopolized the international magician and illusionist market for many years. It is only in very recent times that Ireland and the UK has begun to produce their homegrown magical talents. The UK has now got several leading names in the magician field such as Uri Gellar and Darren Brown. However, at home in Ireland only one individual has emerged with the new style magician talents necessary to compete on an international level. ...read more.

This might not be too damaging for world-renowned magicians like Copperfield and Blaine, but for a young magician starting out and trying to break into the world's elite it causes considerable difficulties. (c) Competitive Environment and Macroenvironment Keith Barry currently stands on his own as Ireland's premier illusionist and magician. However in order to retain this title he must remain acutely aware of his surrounding competitive environment and be aware of any up and coming new talent which may pose a threat to him in the future. In the UK and America however, Keith himself is the up and coming new talent who is trying to create a name for him in both these intensely competitive markets. Firstly, we will look at the UK and what it takes to make or break a magician over there. Keith's two strongest competitors in the UK are spoon bending illusionist Uri Gellar and the controversial Derren Brown. > Gellar's slumping career was completely revived last year after taking part in the jungle survival show I'm a Celebrity, Get Me Out of Here. With the huge exposure Gellar received from this he managed to salvage his career and became a huge celebrity in the UK once again. However his career seems to be hitting another slump after his recent claims of being David Blaine's closest friend backfired when Blaine claimed Gellar was nothing more than a "hanger on" and a "nuisance". > Darren Brown's quick rise to fame also seems to have hit a slump after his recent Russian roulette stunt with a loaded gun on Channel 4 was badly received by the British public. The media, politicians, police and many parent's groups all condemned Brown for trivializing gun violence and suicide. He has received extremely bad press for this stunt especially after it emerged that the whole thing was a scam once police in Jersey, where the stunt took place, confirmed that the bullet loaded into his gun was a blank. ...read more.

This plan is simple and efficient: Stop the problem at the source, minimise damage and begin repair work as soon as possible. Below is an example of how this crisis management strategy would be put into action: Potential crisis - Keith has recently been invited to appear on a well known American talk show. During this interview Keith is asked his opinion about events of September 11th. In his answer he talks about the tragedy of it all and how he remembers the day so clearly. He then goes on to talk about the fire fighters and the brilliant work they had done, but makes a comment about the fire fighters who died that day receiving almost more recognition than the civilian victims who died in the buildings that day. The comment gets picked up on and quickly blown out of all proportion by the media. The next morning all the newspapers run the story strongly criticising this little-known Irish magician for his inappropriate comments. In order to rectify this situation we need to ensure that Keith has the opportunity to explain his side of the story and redeem himself to the American public. It has become such a huge story that we have little trouble convincing another well known talk show host to agree to have Keith on his show to give his account of what was actually said. On the show, Keith replays a video of the original interview and shows that it was a completely innocent comment which was taken up the wrong way and apologises sincerely to family members of the deceased fire men for any pain his comment may have caused. As there was no malicious intent in the comment and this gets clearly conveyed to the public, the source of the problem has been found and damage minimised and repaired. The overall effect of this, turns out not to be the ruin of Keith's budding American career, but in fact results in a raised profile and leaves him in favour with the American public. ?? ?? ?? ?? Keith Barry - Project Brief - 1 - ...read more.