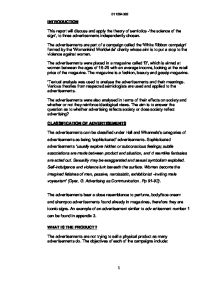 Discuss and apply the theory of semiotics-'the science of the sign', to three advertisements independently chosen.

INTRODUCTION This report will discuss and apply the theory of semiotics-'the science of the sign', to three advertisements independently chosen. The advertisements are part of a campaign called the 'White Ribbon campaign' formed by the 'Womankind Worldwide' charity whose aim is to put a stop to the violence against women. The advertisements were placed in a magazine called 'B', which is aimed at women between the ages of 18-25 with an average income, looking at the retail price of the magazine. The magazine is a fashion, beauty and gossip magazine. 'Textual analysis was used to analyse the advertisements and their meanings. Various theories from respected semiologists are used and applied to the advertisements. The advertisements were also analysed in terms of their effects on society and whether or not they reinforce ideological views. The aim is to answer the question as to whether advertising reflects society or does society reflect advertising? CLASSIFICATION OF ADVERTISEMENTS The advertisements can be classified under Hall and Whannels's categories of advertisements as being 'sophisticated' advertisements. Sophisticated advertisements 'usually explore hidden or subconscious feelings; subtle associations are made between product and situation, and dreamlike fantasies are acted out. Sexuality may be exaggerated and sexual symbolism exploited. Self-indulgence and violence lurk beneath the surface. Women become the imagined fetishes of men, passive, narcissistic, exhibitionist-inviting male voyeurism' (Dyer, G. Advertising as Communication. Pp 91-92). The advertisements bear a close resemblance to perfume, body/face cream and shampoo advertisements found already in magazines, therefore they are iconic signs. An example of an advertisement similar to advertisement number 1 can be found in appendix 3. WHAT IS THE PRODUCT? The advertisements are not trying to sell a physical product as many advertisements do. The objectives of each of the campaigns include: * To create awareness of the charity to women who suffer with violence so they know where to get help. * To create awareness of the charity to people who know women who suffer with violence so they can inform them where they can get help. ...read more.

It may also be playing on the rhetorical trope, 'irony', because domestic violence normally goes on behind closed doors, where others cannot witness it. The bottle of perfume is in colour, making it stand out from the black and white background. This may be because the text on the bottle carries the underlying message of the advertisement and the advertiser wants it to stand out. The text on the advert will be discussed later. Perfume symbolises beauty, feminism and male attraction. This is ironic because men are portrayed as the villains in this advert. Victims of violence don't want to attract men who have a violent nature. By beating her, he is taking away her femininity, her beauty and confidence, making her insecure; quite the opposite effect of what a perfume supposedly does for women. The perfume bottle is larger than a real life perfume bottle but readers know that it represents a bottle of perfume because of what they know already (intertextuality). We assign truth to it. The truth value of a sign can be defined as 'modality'. The photograph being black and white creates the mood. It symbolizes that domestic violence is not a colourful, happy issue. It connotes the unhappiness caused, the darkness it brings into someone's life as opposed to brightening it up. It could also symbolize that life isn't as simple as black and white, as many adverts do. Her hair symbolizes her femininity and beauty. Again something which is taken away when exposed to violence. ADVERTISEMENT NUMBER 2 Advertisements 2 and 3 show a woman only. This could symbolize that women feel very alone when they suffer violence from men. It is an issue that women do not like to talk about. The photograph in this advertisement is cropped; the reader only sees her face. This may be deliberate to draw attention to this part of her body, a part which conveys a lot about a woman's beauty. ...read more.

Introduction to Communication Studies, Second Edition, pp 88). Ideologies and myths exist before the photograph. The three levels of meaning suggested by Panofsky in his iconographic analysis and Barthes's theory of the two orders of signification relate to Ferdinand de Saussure's influential dyadic model of meaning. (See figure 1) The signifier is the signs image as we perceive it. It is a material vehicle. The signifier relates to Panofsky's first level in iconographic analysis, it is what the sign is. It also relates to Barthes's first order of signification, denotation. The signified is the mental concept to which the sign refers. It is the meaning which the signifier refers to. The signified relates to Panofsky's second level in iconographic analysis, it is what the sign means to the reader. The meanings are derived from the reader's culture. The signified also relates to Barthes's second order of signification, which is connotation, the terms Barthes's uses to describe one of the three ways in which signs work in the second order of signification. Although Saussure spends comparatively very little time on it, he does touch on the relationship between signifier and signified and how they have an external meaning which relates to the ideologies and influences in society's way of thinking. He calls this 'signification'. Signification relates to Panofsky's third level in iconographic analysis and to Barthes's myth, the second of Barthes's three ways in which a sign works in the second order. Ideology is at the heart of myth which is chiefly the vale-system of those at the top of society. A model has been devised which shows how all these theories and models developed by different people overlap. (See figure 2) CONCLUSION "Far from turning society upside down, the majority of advertisers, I would suggest, mirror society. It is however, generally a distorted mirror. As a result, society looks at what it see's in the glass, does not like it, and with a certain justification blames the mirror" (White, R. Advertising, what it is and how to do it, third edition) 011264392 1 ...read more.