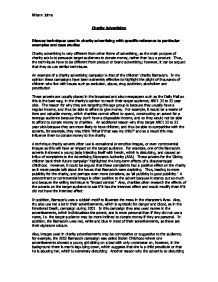 Charity Advertising Discuss techniques used in charity advertising with specific reference to particular examples and case studies Charity advertising is very different from other forms of advertising, as the main purpose of charity ads is to persuade target audiences to donate money, rather than buy a product. Thus, the techniques have to be different from product or brand advertising; however, it can be argued that they do use similar techniques. An example of a charity advertising campaign is that of the children' charity Barnado's. In my opinion these campaigns have been extremely effective to highlight the plight of thousands of children who live with issues such as exclusion, abuse, drug addiction, alcoholism and prostitution. These adverts are usually placed in the broadcast and also newspapers such as the Daily Mail as this is the best way, in the charity's opinion to reach their target audience; ABC1 35 to 55 year olds. The reason for why they are targeting this age group is because they usually have a regular income, and thus be able to afford to give money. For example, it would be a waste of time and valuable money, which charities cannot afford to spend, constructing an advert for a teenage audience because they don't have a disposable income, and so they would not be able to afford to donate money to charities. ...read more.

with only underwear on, however, in the background there is man's legs lying down, which suggests that she is a child prostitute or that he is abusing her, which is extremely disturbing. Another reason why the advert is so disturbing is because the children's faces have been digitally aged which suggests that abuse through prostitution steals children's lives. However, it is not only the image, which is important to advertisements, it is also the language devices they use. The text in charity advertisements is juxtaposed with the images to persuade the target audience to donate money to their cause. Also charity advertisements often use personal pronoun, or direct mode of address, as then it seems as if the advert is talking to you, therefore, it is aimed at the reader. They also use imperative mode, or command form, which is urging the target audience to do something, for example, 'call now.' In addition, in the Emotional Death campaign the text at the bottom of the advertisement was crossed out which is a graphic device to illustrate how the lives of the individuals depicted in the advertisements have been cancelled out by negative childhood experiences. However, this may be an enigmatic code to the target audience because they are wondering why the text has been crossed out. They usually give the website address to promote their website so the target audience can find additional information on the charity, and also where they can also donate. ...read more.

What is also disturbing is the low-camera angle shot, which shows the girl's legs walking which makes the audience think she is older than what she actually is, so when we see her the audience feels disturbed, it could also be a point of view shot from the older man's perspective. They use technical codes such as tracking where they follow the young girl, could be symbolic for a journey in her life, and we see her crying which is emotive and therefore might persuade the audience to donate money to save young people like the young girl shown from a life on the streets. In addition, the girl is wearing a white coat, which is symbolic for innocence, and purity, which is juxtaposed with the red light, which is symbolic for danger. Likewise, the moving image advertisements also use language devices to persuade the audience to donate money. For example, they use imperative mode in the same way Barnado's did; for example, "Please call" and devices such as direct mode of address or personal pronoun "We need your money." To conclude, charity advertising is both different and similar to other forms of advertising. They are different in that charity advertising persuades, or tries to persuade the target audience to give them money, rather than trying to persuade the audience to buy a product. However, it could also be argued that they are similar in that they both use controversial and sometimes emotive images. For example, Benetton's campaigns were extremely controversial. Rhiann Johns ...read more.

Overall, this essay offers some perceptive textual analysis. However, the structure requires work - there are too many small paragraphs that are not needed. In addition, the textual analysis could be much more detailed and should focus on the five technical codes and conventions.