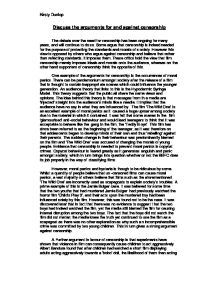 Discuss the arguments for and against censorship

Discuss the arguments for and against censorship The debate over the need for censorship has been ongoing for many years, and will continue to do so. Some argue that censorship is indeed needed for the purpose of protecting the standards and morals of society. However this view is opposed by others who argue against censorship and believe that rather than reflecting standards, it imposes them. These critics hold the view that film censorship merely imposes ideals and morals onto the audience, whereas on the other hand supporters of censorship think the opposite of this. One example of the arguments for censorship is the occurrences of moral panics. There can be pandemonium amongst society after the release of a film that is thought to contain inappropriate scenes which could influence the younger generation. An audience theory that links to this is the Hypodermic Syringe Model. This theory suggests that the public all share the same views and opinions. The idea behind this theory is that messages from the media are 'injected' straight into the audience's minds like a needle. ...read more.

The fact that the boys did not watch the film did not matter; the media knew the truth yet continued to use the film as a scapegoat as there was no other explanation as why such an incomprehensible crime was committed by two young children. This in turn gives a strong argument against censorship. A Further argument in favour of censorship is that experiments have shown that violence in film can consequently cause children to act aggressively. Albert Bandura found that after children had watched a short film displaying adults acting aggressively towards a 'bobo' doll, the likelihood of them then acting violently towards that doll increased. This consequently shows that violence does indeed have effects on children in the way that they are likely to replicate the violence they have seen in TV or film. The findings of this experiment raised issues of concern, principally amongst parents who worried that what their children were exposed to may internally damage them. Therefore, people believe that censorship is still necessary to protect audiences, in particular children, from images that could potentially harm them. ...read more.

It was found that the mass media can reinforce, maintain and strengthen the aggressive disposition of certain individuals. A fitting example of this is the way in which media was used to influence people during World War 2. Hitler used the media to his advantage; using propaganda films to persuade mass audiences to follow his policies. This demonstrates how the media can influence and manipulate audiences, therefore evidently expressing the need for censorship. Censorship is considered to be very much necessary by influential people such as church leaders and members of the government. These people strongly believe that censorship of film and media is essential to protect religion and races, and fundamentally to prevent massive offence and eventually conflict between religious groups and different races .This is evident in films such as 'The Life of Brian'. This film delves into racism and caused turmoil amongst Catholics due to blasphemy towards their religion. This only fuelled their attitude that censorship is a must and will be needed for the foreseeable future. To conclude, I agree with the arguments for censorship. Without censorship there would be a lack of morals and guidelines in society which would undoubtedly affect the behaviour and morals of children and perceptibly the future. ?? ?? ?? ?? Kirsty Dunlop ...read more.