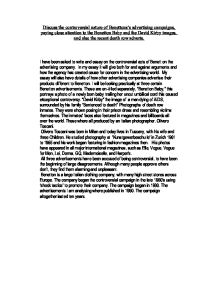 Discuss the controversial nature of Benettons's advertising campaigns, paying close attention to the Benetton Baby and the David Kirby images, and also the recent death row adverts. I have been asked to write and essay on the controversial acts of Benetton the advertising company. In my essay it will give both for and against arguments and how the agency has created cause for concern in the advertising world. My essay will also have details of how other advertising companies advertise their products different to Benetton. I will be looking practically at three certain Benetton advertisements. These are en-titled separately, "Benetton Baby," this portrays a photo of a newly born baby trailing her uncut umbilical cord this caused exceptional controversy. "David Kirby" the image of a man dying of AIDS, surrounded by his family "Sentenced to death" Photographs of death row inmates. They were shown posing in their prison dress and resembling victims themselves. The inmates' faces also featured in magazines and billboards all over the world. These where all produced by an Italian photographer, Olivero Toscani. Olivero Toscani was born in Milan and today lives in Tuscany, with his wife and three Children. He studied photography at 'Kunstgewerbeschule' in Zurich 1961 to 1965 and his work began featuring in fashion magazines then. His photos have appeared in all major international magazines, such as Elle, Vogue, Vogue for Men, Lei, Donna, GQ, Mademoiselle, and Harper's. ...read more.

But I believe that the image is in anyway offensive or wrong. The image consists of a newborn baby trailing its umbilical cord, the baby is covered in blood, and two hands, presumably of a Doctor, are waiting to receive the child. This was created to appear on billboard so the shire size would make the image impossible to be missed. The background is white therefore the baby stands out. The logo is included to the left of the advertisement and is very small almost insignificant. The image is very clear and not edited in any way to make the situation more attractive I agree with the advertisement entirely. Although it is a strange way to advertise I have no objections. The image is very large and might not be what all people want to witness it but birth of babies are publicized on the television as entertainment or education in more graphic detail. Isn't a baby being born "the most wonderful experience"? But people did however complain, the public disagreed strongly with this image "the poster.... Has attracted more than 800 complaints." 800 is not a particularly large amount when in comparison with the millions that would have witness the advertisement. The complaints consisted of "the image is shocking and distasteful...", "many children are reported to have found it disturbing..."and objections regarding the "exploitative use of such an image to sell clothes." ...read more.

who has contributed to the campaign by patiently contacting and negotiating with prisons' Mr. Rice mentions that during 1999 there has been a huge rise in the number of executions in the United States. Of the 600 death sentences that were passed between 1976 and the end of the 20thcentury, approximately 100 executions were carried out in 1999. Benetton advertisements to me have a strong meaning, which differs from individual to individual. For some the adverts are merely indicating how ignorant the world is today. How people emphasise on looking a certain way and how they foresee others. To others they may be seen as a source of entertainment something to discuss on the train or to your local cab driver that will never silence. There are many other views but mine is this I agree entirely with the advertisements, although others wont. The ads are unique and contain moral issues that may keep the brain puzzled all day to find. As there has been such uproar in disagreement concerning the ads this has given Benetton a vast amount of free advertisement. I like all the adverts I have been analysing although I do prefer the "death row" images. These appeal to me a majority more as they have more of a moral message, and become challenging to comprehend the death penalty law. You are left asking yourself, "Do I agree with the death penalty?" All of the benetton advertisements caused great amounts of controversial disagreement. The three mentioned esspecialy, as to more than half the world they have no meaning, as to others they offend highly. ...read more.