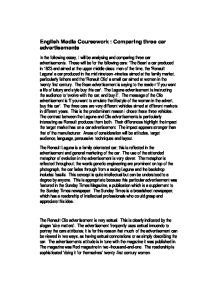 English Media Coursework : Comparing three car advertisements In the following essay, I will be analysing and comparing three car advertisements. These will be for the following cars: 'The Bean' a car produced in 1923 and aimed at the upper middle class men of the time, the 'Renault Laguna' a car produced in the mid nineteen-nineties aimed at the family market, particularly fathers and the 'Renault Clio' a small car aimed at women in the twenty first century. The Bean advertisement is saying to the reader 'if you want a life of luxury and style buy this car'. The Laguna advertisement is instructing the audience to 'evolve with the car, and buy it'. The message of the Clio advertisement is 'if you want to emulate the lifestyle of the woman in the advert, buy this car'. The three cars are very different vehicles aimed at different markets in different years. This is the predominant reason I chose these three vehicles. The contrast between the Laguna and Clio advertisements is particularly interesting as Renault produces them both. Their differences highlight the impact the target market has on a car advertisement. The impact appears stronger than that of the manufacturer. Areas of consideration will be attitudes, target audience, language, persuasive techniques and layout. ...read more.

The advertisement is informal and encourages empathy. 'Size matters' is an opinion is an opinion shared by many women, this is ambiguous and has amusing, sexual connotations. 'It's what you do with it that counts' is an opinion common to men. The Renault Clio provides both. The new Renault Laguna. The important part of that sentence is the adjective is the new; it creates an image of something that is different, modern and better. While the Laguna may be all these things, wasn't the previous model? This is an example of the effect language can have. The text begins with a declarative statement; this gives the impression the addresser is knowledgeable and possessing information we should believe. The second sentence is a three-part list; this is a commonly used persuasive device being used to build impact. Other examples can be found in the advertisement such as rhetorical questions which arrogantly assume your opinion and personification 'Laguna has adapted to it's own'. The words repeatedly suggest positive opinions of the car such as 'awesome' and 'shining example'. The advertisement also uses the positive opinions expressed by others, 'Refined yet aurally delicious.... with a creamy snarl.... pulls with a deceptive vigour.'. The ellipsis could represent negative remarks but the statement has been contextualised into a completely positive set of comments. ...read more.

The logo tells you nothing except the name and the slogan 'the leader of it's class' an opinion is expressed as fact. Because of the production date of the car, a lot of the information in the advertisement would be assumed today 'gearbox' and a picture is used rather than a photograph. The Renault Clio advertisement is eye-catching because a beautiful woman admiring the car in a flirtatious manner occupies half of the advertisements double page spread. The reader immediately stops and thinks 'What's this?'. The information is presented in the form of a phallic shaped list, with three headings and three sentences. This may appear unnecessary but could have a subconscious effect on women. The image of the car is small, but does stand out because it is light on a dark background. 'Size Matters' is central to the page an again light on a dark background. This, if nothing else, makes a woman laugh and creates empathy. I personally like the Renault Clio advertisement best but I believe all of the advertisements serve their purpose. They adhere to the public's sophistication. They are all successful and appreciated by their relevant markets. Advertisements are a persuasive device, which aim to make people stop, read and remember. For the right person at the right time all of the advertisements do this. Rebecca Lloyd ...read more.