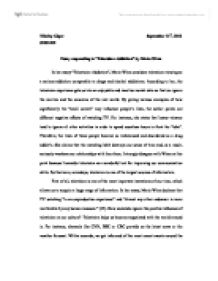 Nikolay Gigov September 21st, 2003 #0330439 Essay responding to "Television Addiction" by Marie Winn In her essay "Television Addiction", Marie Winn considers television viewing as a serious addiction comparable to drugs and alcohol addictions. According to her, the television experience gets us into an enjoyable and inactive mental state so that we ignore the worries and the concerns of the real world. By giving various examples of how significantly the "small screen" may influence people's lives, the author points out different negative effects of watching TV. For instance, she states that heavy viewers tend to ignore all other activities in order to spend countless hours in front the "tube". ...read more.

In her essay, Marie Winn declares that TV watching "is an unproductive experience" and "almost any other endeavor is more worthwhile by any human measure." (15). How could she ignore the positive influence of television on our culture? Television helps us become acquainted with the world around is. For instance, channels like CNN, BBC or CBC provide us the latest news or the weather forecast. Within seconds, we get informed of the most recent events around the globe such as the war in Iraq, the acts of terrorism in the Middle East or the raging Hurricane Isabel in the US. Moreover, Discovery Channel reveals us the worlds of history, technology, nature, science and exploration in a great, interactive way. ...read more.

Can we actually realize how many words "pass through" our brains while we enjoy our favorite shows? Undoubtedly, this experience will help us enrich our vocabulary. When asked the question "How did you learn English?" most of Vanier College students, coming from French speaking environment, will answer: "From TV!". In other terms, television gives us easy access to immense linguistic resources. In conclusion, unlike Marie Winn, I think that modern television has a lot of positive features and therefore it influences our society in a very constructive way. Not only has television become our most common source of information, but it also provides us various forms of education and entertainment, which are very important in our lives. In addition, TV affects our creativity and develops our language skills. On the other hand, will Internet replace television in the future? Word count: 545 words ...read more.