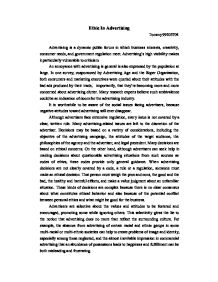 Ethic In Advertising Tommy 99105704 Advertising is a dynamic public forum in which business interests, creativity, consumer needs, and government regulation meet. Advertising's high visibility makes it particularly vulnerable to criticism. An annoyance with advertising is general is also expressed by the population at large. In one survey, cosponsored by Advertising Age and the Roper Organization, both consumers and marketing executives were queried about their attitudes with the bad ads produced by their trade, importantly, that they're becoming more and more concerned about advertising clutter. Many research experts believe such ambivalence could be an indication of doom for the advertising industry. It is worthwhile to be aware of the social issues facing advertisers, because negative attitudes toward advertising will ever disappear. Although advertisers face extensive regulation, every issue is not covered by a clear, written rule. Many advertising-related issues are left to the discretion of the advertiser. Decisions may be based on a variety of considerations, including the objective of the advertising campaign, the attitudes of the target audience, the philosophies of the agency and the advertiser, and legal precedent. Many decisions are based on ethical concerns. On the other hand, although advertisers can seek help in making decisions about questionable advertising situations from such sources as codes of ethics, these codes provide only general guidance. When advertising decisions are not clearly covered by a code, a rule or a regulation, someone must make an ethical decision. That person must weigh the pros and cons, the good and the bad, the healthy and harmful effects, and make a value judgment about an unfamiliar situation. ...read more.

We can refine the definitions by examining what sales promotion does today. Sales promotion offers an "extra incentive" for consumers to act. Although this extra incentive is usually in the form of a price reduction, it may be additional amounts of the product, cash, prizes, premiums, and so on. Furthermore, sales promotions usually include specified limits, such as an expiration date or a limited quantity of the merchandise. Finally, sales promotion has three somewhat different goals, which relate to its three target audiences: (1) to increase immediate customer sales, (2) to increase support among the marketer's sales force, and (3) to gain the support of intermediaries (resellers)in marketing the product. Public relations is "The are and social science of analyzing trends, predicting their consequences, counseling organizational leaders, and implementing planned programs of action which will serve both the organization and the public interest." Developing, designing ads, preparing written messages, and buying time or space for their exposure are the primary concerns of advertising people. In many companies they are separate uncoordinated functions. Partly this is due to tradition and partly to differences in functions. With respect to the former, public relations has historically been physically separated from advertising. This separation has been a result of the nature of the work performed by public relations as well as the people working in public relations. The public relations function operates at two different levels in most companies. One is that you have the technical people who write news releases and produce brochures and newsletters; another level you have the public relations counselor who advises senior management on public opinion and the anticipated impact of corporate actions. ...read more.

In today's society, the field of advertising is extremely broad and diverse. In general terms, of course, an advertisement is simply a public notice meant to convey information and invite patronage or some other response. As that suggests, advertising has two basic purposes: to inform and to persuade, and-while these purposes are distinguishable-both very often are simultaneously present. Advertising is not the same as marketing or public relations (the systematic effort to create a favorable public impression or 'image' of some person, group, or entity). In many cases, though, it is a technique or instrument employed by one or both of these. Advertising can be very simple just as a local ad or it can be very complex, involving sophisticated research and multimedia campaigns that span the globe. It differs according to its intended audience, so that, for example, advertising aimed at children raises some technical and moral issues significantly different from those raised by advertising aimed at competent adults. I disagree with the assertion that advertising simply mirrors the attitudes and values of the surrounding culture. No doubt advertising, like the media of social communications in general, does act as a mirror. But, also like media in general, it is a mirror that helps shape the reality it reflects, and sometimes it presents a distorted image of reality. The important thing is that advertising can not be a tool of a cheat. Untrue advertising is the killer to the advertising industry. Advertising must be true. ...read more.