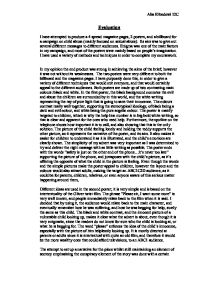 Evaluation I have attempted to produce a 4 spread magazine pages, 2 posters, and a billboard for a campaign on child abuse (mainly focused on sexual abuse). Its aim was to give out several different messages to different audiences. Enigma was one of the main factors in my campaign, and most of the posters were mainly based on people's imagination. I have used a variety of methods and techniques in order to complete my coursework. In my opinion the end product was strong in achieving the aims of the brief; however it was not without its weaknesses. The two posters were very different to both the billboard and the magazine pages. I have purposely done this, in order to give a variety of different techniques that would suit everyone, and that would certainly appeal to the different audiences. Both posters are made up of two contrasting main colours: black and white. In the first poster, the black background connotes the evil and abuse the children are surrounded by in this world, and the white writing representing the ray of pure light that is going to save their innocence. ...read more.

The phrase "Please sir, I want some more" is very well known, and people immediately relate back to the film when it is said. I decided that by using it, the audience would relate back to the main character, and eventually remember how he was suffering, and how he was begging for help, surely the same as this child. The black and white contrast, and the innocent picture of a vulnerable child looking up, makes it clear what the advert is about, even though it is very enigmatic, since the readers do not know for sure who the child is looking at, or what he is begging for. The word "please" enforces the idea of the child's innocence, especially with the picture of him helplessly looking up. It is mostly directed at parents or adults since it is intertextual with quite an old film, and therefore it would be the more wealthy ones that could afford televisions, to an ABC1 audience. The attempt to set up a narrative for the piece whilst still maintaining an element of secrecy emphasising the conspiracy element of the ...read more.

There were some changes that I have made throughout making the project, in order to give out the exact effect on others. For example, in the posters, I tried to make them very simple and just by using as fewer words as possible I will give out the right message. Therefore this has taken me a while. I did not mention the idea of intertextuality used in my brief, as I have thought of it while creating the poster, same as the other one. The theme of subtle colours was also a difference that I have decided to add whilst making it. For the series of pages, I have applied all of what I have mentioned in my brief, expect for changing the colourful bright picture, in order to give a sense of juxtaposition. The logo is on every single page in my campaign, showing the institution I am using;, "darkess to light". I have also used a graphic programme called "Easy media creator 10 suite" to help in editing my photos, and a digital camera for taking the pictures needed. ?? ?? ?? ?? Alia El bedewi 12C ...read more.