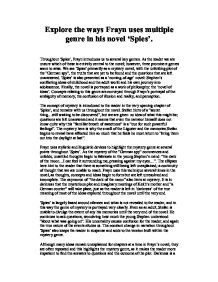 Explore the ways Frayn uses multiple genre in his novel 'Spies'. Throughout 'Spies', Frayn introduces us to several key genres. As the reader we are unsure which of these is entirely central to the novel; however, three prominent genres seem to arise. We see 'Spies' primarily as a mystery novel, with the unfolding plot of the "German spy", the truths that are yet to be found and the questions that are left unanswered. 'Spies' is also presented as a 'coming-of-age' novel: Stephen's conflicting ideas of childhood and the adult world and his own journey into adolescence. Finally, the novel is portrayed as a work of philosophy: the 'novel of ideas'. Concepts relating to this genre are conveyed through Frayn's portrayal of the ambiguity of memory, the confusion of illusion and reality, and perception. The concept of mystery is introduced to the reader in the very opening chapter of 'Spies', and remains with us throughout the novel. Stefan hints of a "secret thing...still waiting to be discovered", but we are given no idea of what this might be; questions are left unanswered and it seems that even the narrator himself does not know quite why this "familiar breath of sweetness" is a "cue for such powerful feelings". The mystery here is why the smell of the Liguster and the memories Stefan begins to reveal have affected him so much that he feels he must return to "bring them out into the daylight at last". ...read more.

It is Barbara Berrill who first introduces Stephen to the adult world by mentioning the concept of an adult having a boyfriend. Stephen finds this an "impossible idea", but one that begins to prey on his mind more and more once Barbara has left, imagining that Mrs Hayward and Auntie Dee are "telling each other the kind of things that Deirdre and Barbara tell each other". This is a concept Stephen has no way of accessing: he realises that he can watch adults from the lookout, but unlike Barbara Berrill he is unable to imagine what they could be thinking or saying. As they watch Mr and Mrs Hayward together, Barbara claims that "they're having a terrible row", but all Stephen can see is that "they're talking quietly and reasonably". Barbara Berrill has a much more knowing interpretation of adult life and Stephen begins to slowly adopt her views, as much as he first refuses to accept her "speculations about the behaviour" of Keith. Before Stephen even begins to mature in this way, he has already started to embrace some ideas of the expectations of boys and men. He refers to the "long examination board of childhood" and understands that as a male he must "show courage" and prove himself fit "for man's estate". These early ideas of the pressures and expectations of men show an understanding that Stephen will later be able to have for the man trapped the Barns, simply "looking for refuge". ...read more.

However, he insists that the mystery of x was never both a German and a tramp: these were simply "two quite unrelated things". These concepts of knowledge and understanding are introduced to the reader as a moment to step back from the focus of the plot and reflect on the incidents that have recently occurred. Another philosophical idea explored by Frayn is how civilisations change over time. As Stefan returns to the Avenue "half a century" later he finds that "the stringy prunus saplings" are now "wise and dignified trees". In the Close itself, Stefan is surprised to find that "everything is as it was...and everything has changed". A "shock of familiarity" hits him as he enters the Close, but this soon subsides and he realises that "it's changed completely". There is no longer a tangle of "luxuriant growth" in front of every house; the mystery of each "separate kingdom" has vanished with time and Stefan feels that "even the sky has changed". By using multiple genre in his novel, Frayn is able to interweave the mystery, coming-of-age and philosophical topics together to create a tale that is gripping, moving and reflective. Stylistic techniques such as the two perspectives of narration are used to highlight the effectiveness of these genres: we are able to feel the tension that the young Stephen experiences as well as gaining the insight and thoughts of Stefan as a grown man. Frayn applies all of these factors successfully throughout 'Spies' and as an audience we are satisfied with the use of multiple genre and the outcome of the plot. ...read more.

***** This is an excellent essay. The candidate sticks to the essay question throughout. Apt quotations have been selected and analysed in a sophisticated manner.