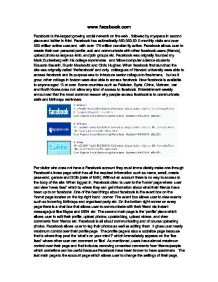 www.facebook.com Facebook is the largest growing social network on the web, followed by myspace in second place and twitter in third. Facebook has estimatically 550,000,000 monthly visits and over 500 million active user,and with over 175 million constiantly active. Facebook allows user to create their own personal profile, add and communicate with other facebook users (friends), upload photo as large as 4mb, and join groups etc. Facebook was orignally founded my Mark Zuckerberg with his college roommates and fellow computer science students Eduardo Saverin, Dustin Moskovitz and Chris Hughes. When facebook first launched the site was orignally called 'thefacebook' and only colleagues of Harvard university were able to access facebook and its purpose was to introduce senior collegue to freshmans, but as it grow, other college in boston were also able to access facebook. Now facebook is available to anyone aged 13 or over. Some countries such as Pakistan, Syria, China, Vietnam, Iran and North Korea does not allow any kind of access to facebook. ...read more.

As mentioned, users have almost maximum control over their page and that includes removing unwanted comments from friends/people which sometime can be useful because Facebook have been known to have spammers. The last main page is the account page which allows user to change the settings of their page, edit their friends, change privacy setting and search for help through the help centre but other than that user can also log out of their account through that page. User can either add or delete their friend/s through the edit friends page. Account setting allows user to change their personal detail such as name, email, password etc. There is also a deactivate my facebook button which allows the user to deactivate or delete their Facebook account for personal purposes. The privacy page allows user to make their page private which can only be viewed by friends. Facebook sounds like something that is too good to be true, it is a whole new socialize network but with all the new and sometime complicated stuff, it can get a bit confusing and that is when the help centre comes in handy. ...read more.

The texts are mainly black which makes it visible and clearly read. The structure of the site is also very neat unlike the site hi5 which has things all over the place. Everything is grouped, meaning that photos will be in the photo section, group will be in the group section and comment box would usually be in the social section etc. User is allowed to do what ever they want to their profile page and that includes changing their appeared name and other things like profile picture. This gives people the opportunity what freedom is like because if there are lots of limits then the site would be poorly rated and the population of it would decrease. The site also offers the public to give feed back in regards to problems and updates needed. This helps make the designer update the site so that it meets the all user's requirements. Facebook have been updated recently and those updates were based on user's complaint about the notification box being too overloaded. Facebook realised the problem and fixed it which made it meet user's requirement. ...read more.