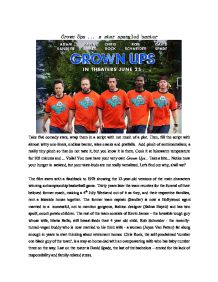 Film Review: Grown Ups The film starts with a flashback to 1978 showing the 12-year-old versions of the main characters winning a championship basketball game. Thirty years later the team reunites for the funeral of their beloved former coach 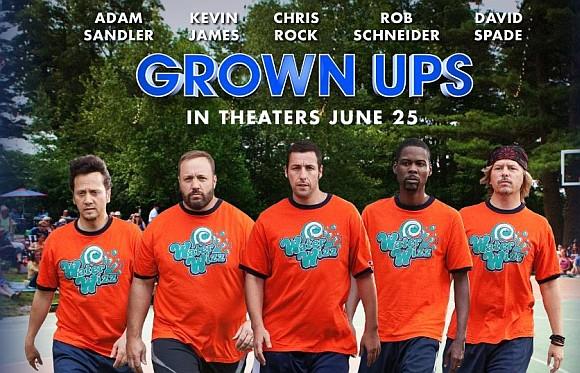 Take five comedy stars, wrap them in a script with not much of a plot. Then, fill the script with  almost witty one-liners, endless banter, wise cracks and pratfalls.  Add pinch of sentimentalism; a really tiny pinch so that do not taste it, but you know it is there. Cook it at lukewarm temperature for 102 minutes and ... Voila! You now have your very own Grown Ups... Take a bite... Notice howyour hunger is  satiated, but your taste-buds are not really tantalized. Let's find out why, shall we?

The film starts with a flashback to 1978 showing the 12-year-old versions of the main characters winning a championship basketball game. Thirty years later the team reunites for the funeral of their beloved former coach, making a 4th July Weekend out of it as they, and their respective families, rent a lakeside house together. The former team captain (Sandler) is now a Hollywood agent married to a  successful, not to mention gorgeous, fashion designer (Salma Hayek) and has two spoilt, couch potato children. The rest of the team consists of Kevin James – the loveable tough guy whose wife, Maria Bello, still breast-feeds their 4 year old child. Rob Schneider - the recently-turned-vegan buddy who is now married to his third wife - a woman (Joyce Van Patten) far along enough in years to start thinking about retirement homes. Chris Rock, the self proclaimed 'number one black guy of the town', is a stay-at-home-dad with an overpowering wife who has baby number three on the way. Last on the roster is David Spade, the last of the bachelors – envied for his lack of responsibility and family-related stress.

Given such a talented cast, one can easily be fooled into believing that a hilarious, unpredictable roller coaster ride will ensue, twisting and turning before coming to a crashing, but resolving halt. Wrong. Grown Ups is much more like a yoga class than anything out of an amusement park. Not only is the plot without substance, none of the characters have any depth. They all seem to be the same level of intelligence, all display only a few consistent personality traits, and all turn out to be well... just mild-natured, good people.

Given these points it seems perfectly reasonable to believe that the only audience laughter would heard after they get their money back from the ticket office. But this film is unlike other comedies with similar shortcomings; there is a relaxed atmosphere about the actors as they breeze through the punch line loaded script. Sure it  has  its misses, but, they are generally outnumbered by the hits. Maybe it was the like-ability of the star-studded cast and the laid-back atmosphere that they exuded through the screen. Or maybe my popcorn was loaded with illegal additives. Whatever it may have been, Grown Ups was, in my eyes, a reasonably entertaining comedy. It certainly doesn't touch the likes of TheHangover or The40 Year-Old-Virgin. Nevertheless, it had me and the 250 other people in the cinema laughing.