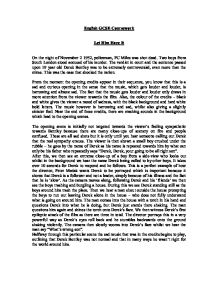 Film review Let Him Have It On the night of November 2 1952, policeman, PC Miles was shot dead. Two boys from South London

English GCSE Coursework Let Him Have It On the night of November 2 1952, policeman, PC Miles was shot dead. Two boys from South London stood accused of his murder. The verdict in court and the sentence passed upon 19 year old Derek Bentley was to be extremely controversial, even more than the crime. This was the case that shocked the nation. From the moment the opening credits appear in their sequence, you know that this is a sad and curious opening in the sense that the music, which gets louder and louder, is harrowing and almost sad. The fact that the music gets louder and louder only draws in more attention from the viewer towards the film. Also, the colour of the credits - black and white gives the viewer a mood of sadness, with the black background and hard white bold letters. The music however is harrowing and sad, whilst also giving a slightly sinister feel. Near the end of these credits, there are crashing sounds in the background which lead to the opening scenes. The opening scene is initially not targeted towards the viewer's feeling sympathetic towards Bentley because there are many close-ups of scenery on fire and people confused. These are all sad shots but it is only until you hear someone calling out Derek that the real sympathy ensues. The viewer is then shown a small boy crushed under the rubble - he goes by the name of Derek as his name is repeated towards him by what can only be his father who repeatedly says "Derek, Derek, your going to be all right son". After this, we then see an extreme close-up of a boy from a side-view who looks out whilst in the background we hear the name Derek being called to by other boys. It takes over 10 seconds for Derek to respond and he follows. ...read more.

The music here is harrowing and tense as the camera zooms in on the worried reflection of Bentley's face. Once Derek leaves his house the harrowing music begins again, we see that it is dark outside and gloomy. Derek walks up the road with the 'college boy' and due to the fact that Derek is silent throughout all of this shows that although he is 'slow' and has epilepsy he knows who he is walking to and why. When they meet with Craig and another friend, the director shows close-ups of Derek and Craig's face to build up suspense. Then Derek gives the keys to the butcher's to Craig, again the director outlines how Derek is a follower and not a leader. When they realise that the butcher is still in his shop, the director shows the frustration in all of their faces, but none more so than Craig. This is most likely because that night, Craig maybe hadn't meant to kill but he certainly had the intention of doing something stupid because of his brother's imprisonment. After seeing this Craig immediately makes a plan to down and check out a place but his friends want nothing do to with it, this definitely angers Craig - who swears and tells them go. The director shows Craig's anger by using close-up shots on his face. Whether Bentley stayed with Craig after that was out of friendship, his disease or just fear, we don't know. All we know is that he followed Craig and signed himself a death wish. As they reach the outside of Barlow & Parker's, the music begins, more repetitive than before and getting louder. Craig whispers to Derek to climb the gates, the camera then goes to a long-shot showing them climb the gate, one by one. Whilst this is going on, we here voices in the background and then the camera shifts to the living room of another house, where a girl is looking out of the window directly at Craig and Bentley. ...read more.

He wants to be like his brother and knows he can't get the death penalty. The sling creates sympathy but compared to his thuggish acts on the rooftop, he doesn't win anyone over in my opinion. As for Bentley who has bruises and patches on his face - this shows that while Craig was lying in hospital resting, Derek was beaten whilst under arrest. One thing is for sure; throughout the trial Derek looks confused and scared. When he comes to testify, Derek is asked questions that he doesn't fully understand, and under the time limit that is given by the interrogating lawyer and biased judge, Derek Bentley didn't stand a chance. When being asked questions, Derek's answers are short which reflect his intelligence. Not only are his answers short but they are also slow due to mental disability which again creates sympathy. When Derek is struggling to answer, he looks around for help, the camera switches from his sister to the rest of his family and friends. When Derek gets tense and cannot answer a question, the music gets louder and louder, more harrowing than before with the addition of the violin. This shows the real pressure that Derek is under and for someone of his mental capabilities, it is ultimately too much too bare. Again, throughout Craig's testimony, he has a small smirk and knows that he will get prison time but not death. The verdict, which is given to Craig, is a meagre ten years - which prompts him to put on a big smile. The verdict given to Derek is death, via hanging. A huge inward gasp from the audience and Derek in the courtroom creates sympathy. This is shock for anyone associated with the trial. Bringing this essay to a close, the hanging scene is by far the most powerful scene of the film, simply because it is quick and almost scary but realistic. Derek Bentley was a victim of British Injustice and did not deserve to die and it is as simple as that. ...read more.