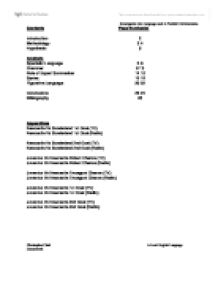 For this piece of coursework I have decided to make an investigation into language used in football commentaries.

Another linguistic technique employed by television commentators to avoid mistakes is through the use of adverbial phrases. Since the football pitch is a clearly defined area, with delineated areas, spaces and areas within it are quite frequently and vividly sign-posted by employing adverbial techniques. In television commentaries, this is not a technique I expected to see used. The reason being that since the television commentators have the benefit of visual aids and the viewer can clearly see where the play is going on in terms of the area of the pitch these adverbial phrases would rarely be used in television commentaries. However, in the case of my television transcripts there is clear evidence of these adverbial phrases. For Example, 'Edge of the Box', 'Forward Run', 'Left Hand Side', 'In the Sunderland half', 'Wide right', 'Clearance', 'The balls fed up to the frontman' and 'Penalty area'. An additional technique which relates to where things are on the pitch and helps the commentator to stay on track and avoid mistakes is the use of Deictics. This refers to words or phrases, which give pointers to where things are (Both spatially and temporally). Some examples of the use of Deictics from my transcripts are 'That's a freekick', 'This is a problem for Given', 'That was clever play', 'This time he has won the ball' and 'That sloppy piece of play'. It is also often the case that the determiner 'That' tends to be used by the commentator as the events on screen unfold. On the other hand 'This' is often used when the expert summariser is reviewing an event that has happened during the game with the aid of an action replay. In the case of my transcripts both of these facts are true. Deictics such as 'This' and 'That' are always likely to be used in television commentaries because the commentator is reflecting in language what the viewer can see on their screen. As an additional way of buying themselves some time, commentators also use pauses. ...read more.

away for Kieron Dyer () Dyer plays a first time ball to Solano () then Solano hooks it over the top (.) and Dyer's got a march on his man if he can keep the ball in it's still Kieron Dyer BURSTING () KIERON DYER TO THE RIGHT HAND SIDE EDGE OF THE BYLINE HE NEEDS AN OPTION () STILL DYER ACROSS THE FACE () SHEARER HITS IT PLAYERS ARRIVING () OH IT'S ROBERT () IT'S A GREAT SAVE FROM BUFFON (.) OH A THOUGHT THAT WAS A GUARANTEED GOAL AND THAT REALLY WAS AN EXCEPTIONAL SAVE (.) LAURENT ROBERT HIT IT () AND SOMEHOW BUFFON STOPPED IT. The Pauses in the television commentary act as distinct breaks in the flow of the commentary, with the accompanying pictures helping to maintain the overall cohesion. The way in which pictures influence what is being said is illustrated by the way the utterance 'Jenas just stood his ground ahead of him () that was clever play from the young man (...) solid play (..) Dyer ()' is broken up by 'bounces nicely for im'; here the commentator is forced to respond to what he sees on the screen before completing what he intended to say. This balance between language and pictures means that single, one and two-word phrases are often used as complete utterances. Noun phrases such as 'Solid Play(..) Dyer ()' and 'Chance' act as complete utterances, making complete sense to the viewer when shown alongside the pictures. On the other hand the radio commentator is at a disadvantage when commentary on the same piece of action, due to the lack of pictures. Therefore, the effect is that Language has to carry out the task of maintaining the overall cohesion of the text. The micro-pauses, seen in the radio transcripts, indicated by '()' in the text, are in most cases simply the commentator taking short breaths rather than syntactical breaks in the text. This means that utterances such as 'AND BUFFON KEEPS OUT ROBERT' and 'AND MANAGES TO PUNCH AWAY THE REBOUND TOO' are much closer to the syntactical elements found in writing. ...read more.