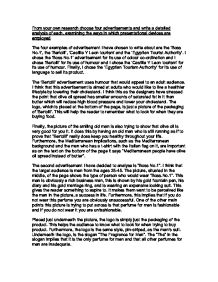 From your own research choose four advertisements and write a detailed analysis of each, examining the ways in which presentational devices are employed.

From your own research choose four advertisements and write a detailed analysis of each, examining the ways in which presentational devices are employed The four examples of advertisement I have chosen to write about are the 'Boss No.1', the 'Bertolli', 'Castilla Y Leon tourism' and the 'Egyptian Tourist Authority'. I chose the 'Boss No.1' advertisement for its use of colour co-ordination and I chose 'Bertolli' for its use of humour and I chose the 'Castilla Y Leon tourism' for its use of humour. Finally, I chose the 'Egyptian Tourism Authority' for its use of language to sell its product. The 'Bertolli' advertisement uses humour that would appeal to an adult audience. I think that this advertisement is aimed at adults who would like to live a healthier lifestyle by lowering their cholesterol. I think this as the designers have stressed the point that olive oil spread has smaller amounts of saturated fat in it than butter which will reduce high blood pressure and lower your cholesterol. ...read more.

Placed just underneath the picture, the logo is simply just the packaging of the product. This helps the audience to know what to look for when trying to buy product. Furthermore, the logo is the same style, pin-striped, as the man's suit. Underneath the logo, is the slogan "The Fragrance for Men". The "The" in the slogan implies that it is the only perfume for men and that all other perfumes for men are inadequate. The next article I am going to analyse is the "Castilla Y Leon" tourism advertisement. Smiling seems to be the theme for this advertisement, the main reason for this being the slogan, which is situated at the top of the page: "Smile! You're in Castilla Y Leon". Furthermore, all the models are smiling in the advertisement and the sun is shining which people associate with happy positive energy. Additionally, there is a big smile across the centre of the page. All these smiling images are trying to drill the idea that this is a happy place to be into the audience's head. ...read more.

It is yellow and orange which are colours you would associate with Egypt due to fact of its many deserts and constant sunshine. Vocabulary in this advertisement is used to brilliant effect, to making the holiday seem unmissable by using words such as: "Unforgettable", "Beautiful", "Magnificent" and "Magical. Another feature that the designers have added are pictures. Obviously, there has been a lot of thought put into the choice of picture. The middle photograph is a beautiful, picturesque beach with hardly any people on it. This is very important as they are trying to stress the point that Egypt is not busy and bustling like an ordinary holiday destinations. Finally, the picture on the bottom shows an ancient civilization, which is obviously a big tourist attraction but there is hardly anybody there. Again this is stressing the point that Egypt is a getaway from the busyness of everyday life. All these advertisements use a variety of different types of devices to appeal to their target audiences. The "Bertolli" advertisement used humour. The "Boss No.1" used images. The "Castilla Y Leon" used slogans and images and finally, "Egyptian Tourist Authority" used sophisticated vocabulary. ...read more.