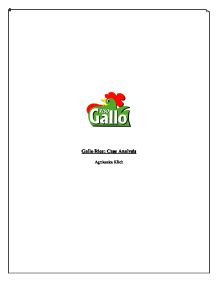 Gallo Rice: Case Analysis Agnieszka Klich Introduction F&P Gruppo is a private firm specializing in the value-added rice industry that has been a family owned operation for five generations. F&P Gruppo's Gallo brand name and signature rooster logo is consistently utilized across all product lines and markets. F&P Gruppo has extensive international operations and its products are sold throughout Europe and South America. Wholly owned subsidiaries and production facilities are located in Argentina, Italy, Germany, and Uruguay. Additionally, F&P Gruppo also has wholly owned subsidiaries in Brazil and Switzerland and a joint venture in the United Kingdom. The company's stated goal was to achieve market share leadership in an increasingly segmented industry through producing and marketing differentiated higher margin products. Their success to date is a result of many contributing factors. F&P Gruppo is one of the few companies to be involved in the entire rice producing process: from growing and milling to packaging and marketing. They have been dubbed 'the rice specialist' and have a competitive advantage of owning the entire value chain. Rice is the only food industry they operate in, so they are very focused with a high degree of expertise. This has led to a deep understanding of how to market to their customer base. A better than average commitment to research and development has yielded competitive advantage in creating new and improved strains of high quality rice, developing proprietary manufacturing processes, and improved packaging. A company objective displaying the importance of research and development for F&P Gruppo is that 35% - 40% of total gross margin should be derived from products that were not in the product line five years prior. These company attributes, combined with the company consistently earning the highest quality grades for rice, are the components of F&P Gruppo's success to date. There are two main strains of rice. Indica grains are long and thin and are fluffy when cooked. ...read more.

The main demographic characteristics of the two countries were also very similar, including such things as literacy rate and television penetration. The major difference was that Argentina held 30% of its population in one area, Buenos Aires. In the early 1990's Gallo was holding a 17.5% market share in the total rice market of Argentina. However, they held a 48% share in Buenos Aires. They were considered the market share and product innovation leader. Gallo had a varied product line in Argentina. One such product was long-grain rice for traditional cooking that had to decrease to 28% of Gallo's volume. Another was long-grain parboiled rice called Oro, which was easy to prepare and had just slid to 59% of Gallo's volume. A third product was parboiled long-grain rice with higher nutritional value that represented 5% of Gallo's volume. Lastly, another long-grain rice in a risotto mix that accounted for 1% of Gallo's volume. Gallo was doing a majority (three-quarters) of their business in the growing channel of large supermarkets. Gallo was very weak in the more rural medium and small stores, which made up 27% of the retail rice market but only made up 15% of Gallo's volume. Gallo's sales agents that serviced the more remote areas were only accounting for 10% of Gallo's total volume. Also, Gallo was only present in about 77% of Argentina's retail food stores. Gallo was facing competition from three other national brands, but combined with Gallo they still only represented 45% of the retail rice market. Most of the market was sold by smaller regional brands that required a lot more local analysis to compete against. The one major national competitor that Gallo faced was Molinos, who produced the Maximo brand. Molinos attacked Gallo through Maximo by spending twice as much on advertising as Gallo and by pricing the product at 12% under the Gallo competitive products. This strategy had allowed Molinos to increase the market share for Maximo from 5.3% to 7.5% in one year. ...read more.

Poland probably holds the most potential out of all three countries because it is an emerging market in the rice industry. Unlike Italy and Argentina, rice is not a staple in the lives of the Polish population. Since rice is considered more of a substitute to potatoes than a replacement, the opportunity exists to educate Polish consumers on the benefits of using rice in hopes of changing their eating habits. Due to the changing political and economic conditions in Poland, consumers were just beginning to learn about the varying benefits of imported products, and for the first time they were learning that they had choices between the different brands. In this emerging, price sensitive market, Gallo Rice would gain the most advantage by being a first-mover to establish a early presence. The best way they can establish their brand name would be through educating the Polish society on the differences in types of rice, the recipes that can be used to make rice, the role of nutrition, and the difference in brands. Overall, Gallo Rice would seem to be a good company to use as an example of the appropriate way to approach marketing in foreign countries. Gallo Rice has been aided in their international expansion by the fact that they have kept an eye on consumer interests in the respective countries they have chosen to operate in. Rather then releasing a single homogeneous product line throughout the world, they have done a good job of adapting to the wants of needs of local consumers. Gallo has also done a good job of keeping track of the individual actions of their major competitors in the respective markets in which they operate. By keeping pace with the different consumer expectations in individual countries, as well as keeping tabs on the actions of local competitors, Gallo Rice has created a strategic advantage over its competitors that will continue to aide them in the future. ...read more.