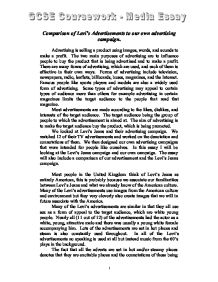 In the film advertisement a girl walks into the nightclub wearing a gorgeous, sexy-looking, red dress, she tries to attract the attention of one of the boys there but he does not seem to be interested. Angrily she leaves the club, returns wearing a pair of jeans, the music stops, and everyone is suddenly in awe of the girl's casual fashion. The other people that were present at the club give the girl admiring glances and the boy whose attention she was previously trying to get walks towards her. The girl who now thinks she is very special ignores him and goes for another boy that was at the club. The basic storyline of our advertisement is appropriate for our target audience because it is something that they are always trying to do. (Attract the opposite sex) The connotations of the smart red dress that the girl was wearing the first time she entered the club are meant to be feminine, sexy, and daring. The fact that she does not get the boys attention wearing the dress proves that jeans are more feminine, sexy, and daring than a dress. The name for our brand of jeans was Zodiac. We chose this name because many teenagers believe in horoscopes and mystery. A name like Zodiac would influence the target audience because it would make them think that buying the jeans would have a positive effect on their fate. ...read more.