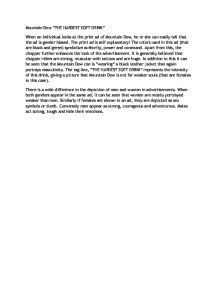 Gender stereotypes in two adverts and how the US Government publicises its War on Drugs.

Mountain Dew "THE HARDEST SOFT DRINK" When an individual looks at the print ad of Mountain Dew, he or she can easily tell that the ad is gender biased. The print ad is self explanatory! The colors used in this ad (that are black and green) symbolize authority, power and command. Apart from this, the chopper further enhances the look of the advertisement. It is generally believed that chopper riders are strong, muscular with tattoos and are huge. In addition to this it can be seen that the Mountain Dew can is "wearing" a black leather jacket that again portrays masculinity. The tag line, "THE HARDEST SOFT DRINK" represents the intensity of this drink, giving a picture that Mountain Dew is not for weaker souls (that are females in this case). There is a wide difference in the depiction of men and women in advertisements. When both genders appear in the same ad, it can be seen that women are mostly portrayed weaker than men. Similarly if females are shown in an ad, they are depicted as sex symbols or dumb. Conversely men appear as strong, courageous and adventurous. Males act strong, tough and hide their emotions. LUV Diapers Gender identity is very significant in understanding consumer behaviors. ...read more.

The War on Drugs The so-called war on drugs has long been an issue in the national press. As long as I can remember, campaigns like "just say no" have been encouraging children to stay away from illegal drugs. In the last few years, however, simple slogans have mutated into aggressively and often erroneously exaggerated media assaults. The purpose of such messages is to frighten drug users and prospective drug users into abstaining from use and to turn the public eye onto drugs in general. Two television commercials appeared during the 2002 Superbowl that suggested rather strongly that drug sales fund terrorist activities around the world. The ad I wish to examine is one in which items (presumably to be used for terrorist acts) flash on the screen, and in between, prices are listed. The ad is reminiscent of the popular credit card commercials depicting items' prices and containing a final "priceless" item. The difference is, the first advertisement shows guns, a fake ID, a box cutter, and several other dangerous items. The commercial opens with a nighttime view of a house. As the screen flashes to fake passports, the idea of something illegal or immoral is carefully reinforced. As the image changes, a price appears on the screen against a black background, to somehow illustrate that all of the items that will appear had a price-therefore the money must have come from something illegal. ...read more.

Finally, a majority of Americans do not use drugs. That fact alone ensures that most people will find the message grimly accurate. Our culture tells us to believe what we read in newspapers and see on television, so most people do. Since I was a small child, I have firmly believed that drugs are immoral and rightfully illegal. Therefore, I cannot fully detest this ad, since on some levels it achieves what many other campaigns might have failed to-emotional response. I do not believe that making generalizations is any way to educate the public though. If such commercials continue, then paranoia will begin to circulate, and eventually the world will become unsafe for all drug users, regardless of their intentions. With many problems of their own, I feel that drug users do not need added suspicion. If such a scrupulous eye is cast upon drug use, then the public may forget that terrorism has been running mostly unchecked for years. Terrorist attacks happen for many political reasons, so how can anyone assume that without money allegedly made on drugs that the terrorists will simply shut down their operations. The fact is, terrorism will probably always exist in one form or another, and even if someone has isolated something that funds it, that offers little solution for ending the conflicts. Blaming drug users cannot stop terrorism, and it certainly cannot bring back the lives lost during the World Trade Center and Pentagon attacks. ...read more.