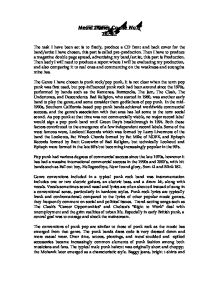 Media Studies Course Work Report The task I have been set is to firstly, produce a CD front and back cover for the band/artist I have chosen, this part is called pre-production. Then I have to produce a magazine double page spread, advertising my band/artist, this part is Production. Then lastly I will need to produce a report where I will be evaluating my production, and also comparing it to real ones and commenting on the weakness and strengths mine has. The Genre I have chosen is punk rock/pop punk, It is not clear when the term pop punk was first used, but pop-influenced punk rock had been around since the 1970s, performed by bands such as the Ramones, Buzzcocks, The Jam, The Clash, The Undertones, and Descendents. Bad Religion, who started in 1980, was another early band to play the genre, and some consider them godfathers of pop punk. In the mid-1990s, Southern California-based pop punk bands achieved worldwide commercial success, and the genre's association with that area has led some to the term social sound. As pop punk at that time was not commercially viable, no major record label would sign a pop punk band until Green Day's breakthrough in 1994. ...read more.

The research I have found out will influence my designs for pre-production and production as I have found out many aspects that are included in magazines and CD covers, some that need to be included such as bar code, record label, band name, album title etc, and others to help sell it like how I will represent the punk culture in my pictures, colours, and writing style I use. There are also many techniques that are used to attract the audience's attention which will need to be used. The layout of my CD is one that most bands use with a picture on the front along with band name and album title, and then on the back the track list and another picture, of the band. I also placed parental advisory sticker in the bottom corner, this is because it needs to have the label on it to warn people, it is in the corner as it is not the main focus point of the CD, and this was also the case for the album name as the main selling points are the picture and band name. From looking at my two page spread and existing magazine articles, such as Q, Uncut and Kerrang, I can see the strengths and weaknesses in my work. ...read more.

If I had to re-do this task I would change a number of things, firstly I would like to include more pictures of the band with a more themed approach to it as they do in most music magazines. Another problem I found was the writing lacked interest in the way it was set out in a Q&A style; I would change this so the answers to the questions are worked in to the writing which would give it more of a flow while reading. Also I find my fact file is not as exciting, or looks as good as one in a real magazine. So to improve this I think I would look at more techniques in other magazines to see what else I could place there instead. Another problem I found was it doesn't look as professional as it should do, the layout of it seems too structured and not like in a magazine for this category and the colours I feel don't suit the style of the band as I would like them too. It also seems colourless and plain which may put the reader off, but too much colour is also off putting being too "in your face". I have also realised I would need a spine on my CD cover if I wanted it to be a proper CD cover in a case. ?? ?? ?? ?? ...read more.