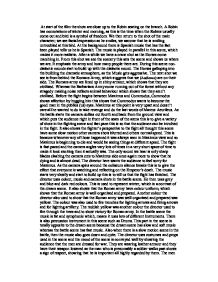 At start of the film the shots are close up to the Robin seating on the branch. A Robin has connotations of winter and morning, as this is the time when the Robins usually come out and bird is a symbol of freedom. We then return to the shot of the main character; we see facial expression as he smiles, we assume that he is smiling untroubled at this bird. At the background there is Spanish music that has the fact been played tells us he is Spanish. The music is played in parallel in this scene, which makes it more realistic. After a while we have a crane shot as the Horses come marching in. From this shot we see the scenery this sets the scene and shows us where we are. It emphasis the army and how many people there are. During this scene non-dialectic sounds start to build up with the dialectic sound. The Horses galloping into the building the dramatic atmosphere, as the Music gets aggressive. The next shot we see is from behind the Romans Army, which suggests that we (Audience) are on their side. The Romans army are lined up in shiny armour, which shows that they are civilized. Whereas the Barbarians Army come running out of the forest without any stragedy making noise reflects animal behaviour which shows that they aren't civilized. ...read more.

He also stands on the middle of the soldiers, with men all around him, all of whom salute and laugh at his jokes. From this respect we assume he is a great soldier. He also upset over the loss of some of his men, which shows his sensitive side. We see this again as he gives his dog a quick glance and obviously cares about the animal. When Quintus says that the opposition should know when to give up, Maximus replies, "Would you, Quintus? Would I?" He believes if you believe in something, you should not give up. Maximus admires the opposite side when they refuse to give up even though it is not at all likely that they will win. From clues such as these, we have established Maximus as the 'hero' of the film. It is important to have a hero in films, as it is one of the reasons we want to continue to watching the film. We want to know if he will be okay and what will happen in the future. There are many contrasts used in the film, Such as when Russell Crowe is daydreaming. In his dream the sun is shining and he is walking through a cornfield. You can tell that it is a memory because in the next seen it switches to reality, the dark and dismal reality, war. ...read more.

really jumps off the screen, making this movie a glorious spectacle to behold. The Roman setting, and when Crowed and company take the field of battle in the Roman Coliseum, you feel like you are standing right there on the 50 yard line with them. Just the effects put into sets and settings alone will make you gasp and squeal in delight. The balance of the film is perfect. The battle scenes are bloody, violent, and well directed, with the opening "clashing armies" scene seeming like something out of "Brave heart", yet nicely balanced against scenes of powerful dialogue and plot development. In fact, much about this film seems like "Brave heart" in a Roman Gladiator setting. There are many contrasts used in the film, Such as when Russell Crowe is daydreaming. In his dream the sun is shining and he is walking through a cornfield. You can tell that it is a memory because in the next seen it switches to reality, the dark and dismal reality, war. The certificate for this film is 15 showing that it is aimed at adults and older teenagers. This is because you need an adult frame of mind to understand all of the symbolism in the film. For example, the robin that flies from the battle scene symbolizing freedom. Another example would be the dog. The dog symbolizes faith and loyalty, but also symbolizes aggression and dominance. ...read more.