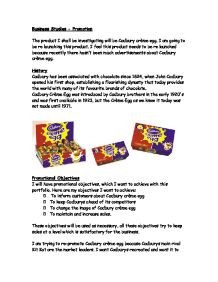 GNVQ Business Promotion The product I shall be investigating will be Cadbury crme egg. I am going to be re launching this product

Business Studies - Promotion The product I shall be investigating will be Cadbury cr�me egg. I am going to be re launching this product. I feel this product needs to be re launched because recently there hasn't been much advertisements about Cadbury cr�me egg. History Cadbury has been associated with chocolate since 1824, when John Cadbury opened his first shop, establishing a flourishing dynasty that today provides the world with many of its favourite brands of chocolate. Cadbury Cr�me Egg was introduced by Cadbury brothers in the early 1920's and was first available in 1923, but the Cr�me Egg as we know it today was not made until 1971. Promotional Objectives I will have promotional objectives, which I want to achieve with this portfolio. ...read more.

campaign begins. 1990-1993: The first TV Advertising campaign to feature the "How Do You Eat Yours?" theme. This was achieved through the zodiac signs. 1994-1996: Spitting Image characters continued "How Do You Eat Yours?" 1997-1999: George Dawes from Reeves & Mortimer Shooting Stars. 2000-2003: The "Pointing Finger" campaign. 2005: 'The Eggmeister Returns' campaign Timescales for Advertising My campaign will run through Easter. I am planning to run my campaign through Easter because it is that busiest. Most Easter eggs are sold during this period. My campaign will start from 24th March and will run through Easter till 1st May 2006. I have chosen this dates in particular because customers tend to start buying Easter Eggs 2-3 weeks before Easter, and Easter lasts up to a months that's why I will decide to end my campaign on 1st May. Budgets ...read more.