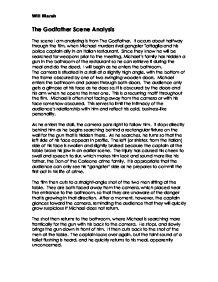 The Godfather Scene Analysis The scene I am analyzing is from The Godfather. It occurs about halfway through the film, when Michael murders rival gangster Tattaglia and his police captain ally in an Italian restaurant. Since they know he will be searched for weapons prior to the meeting, Michael's family has hidden a gun in the bathroom of the restaurant so he can retrieve it during the meal and do the deed. I will begin as he enters the bathroom. The camera is situated in a stall at a slightly high angle, with the bottom of the frame obscured by one of two swinging wooden doors. Michael enters the bathroom and passes through both doors. The audience only gets a glimpse at his face as he does so; it is obscured by the doors and his arm when he opens the inner one. This is a recurring motif throughout the film. ...read more.

He stops, and slowly brings the gun down in front of him. It then cuts back to the shot of the men at the table. The captain looks over again, but the faint sound of a toilet flushing is heard, and he quickly returns to his meal, apparently unconcerned. The scene returns to the bathroom, where the camera shifts back to the left to follow Michael's exit from the stall. His face is briefly glimpsed again before he stops in the area between the two swinging doors. He pauses in this in-between area, facing away from the camera. More than half the frame is obstructed by the door and wall, leaving only the back of his head visible in the upper portion of the frame. This is a deliberate shot, containing a great deal of visual information. He is between the doors, as he is between his old life as a devoted lover and war hero, and the criminal future he is doomed to by killing the men. ...read more.

No subtitles are provided, suggesting that Michael is not really listening to what he is saying. This is reinforced as the camera slowly zooms past Tattaglia's shoulder, focusing on Michael's face. His eyes move around constantly, but never make contact with either man, and the sound of the train grows even higher as it squeals to a stop. Michael begins to draw his gun and stand up. The camera cuts to a position directly behind Michael, and as he moves to the right, Tattaglia's head comes into view. Michael shoots him in the forehead, and a red mist of blood flies out behind him. The view then switches to the captain, a bite of veal halfway to his mouth, then briefly to Michael holding the gun, and then to a side view as Michael shoots him in the throat. There is a brief cut back to him holding the gun, and then to the captain clutching his throat as he is shot again, dead-center in the forehead. And with that, Michael Corleone the war-hero becomes Michael Corleone the gangster. ?? ?? ?? ?? Will Marsh ...read more.