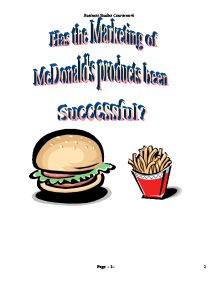 Has the Marketing of McDonalds products been successful?

Introduction The aim of this assignment is to investigate whether the advertising of McDonalds' products has been successful. To achieve this aim I am going to undertake research from both the general public and McDonald's itself, and use referenced information from other sources such as encyclopaedias and the Internet. Background Information on McDonald's McDonald's Corporation Inc., a multinational fast food restaurant company, was founded by the McDonald brothers when they opened their drive-in restaurant in San Bernardino, California, in 1948. They began by selling the traditional fast-food products such as hamburgers, cheeseburgers, soft drinks and chips. By the mid 1950's the original McDonald's was generating $350,00 a year. In 1954, Ray Kroc, a salesman who was convinced that the McDonald's idea could work in other cities was appointed by the McDonald brothers to sell franchises and a second McDonald's was opened in Illinois in 1955. By the end of the decade 228 restaurants had been opened which generated $37.6m in revenues McDonald's continued to grow in the 1960s and during this period it adopted many of its well-known associations. In 1962 the golden arches were adopted as its trademark and Ronald McDonald was created as its official mascot. McDonald's also pursued several aggressive marketing campaigns during this period, including the very successful "You deserve a break today." By 1972 there were 2000 McDonald's restaurants and the company had begun to expand abroad. McDonald's also expanded its product range in the 1980s, such as the introduction of breakfast meals and the bite-size Chicken McNuggets. They have also attempted to attract new customers by introducing healthier food. However, some of these products generated disappointing sales. They have also continued to expand abroad and McDonald's was one of the first companies to start trading behind the Iron Curtain, when they opened restaurants in Moscow and Beijing. McDonald's recently signed a marketing agreement with Disney, under the terms of which McDonald's will promote Disney films through its outlets in return for operating at Disney film parks. ...read more.

and the fact that they may not be able to give a complete picture of the respondent's feeling. There are two main methods of sampling - random (at which respondents are picked out at random) and stratified (in which a certain number of an age group and/or gender are picked out). I will use random sampling because it will enable the whole spectrum of the public to be sampled and therefore give me a more justifiable conclusion. Although there will probably be more people in one gender/age group than another, as long as the differences are too not great then the results should not be too badly affected. To complement my research I will use financial information from McDonald's to assess their current financial situation and whether their marketing strategies have been successful. The Questionnaire In this section I will go through the questions asked on my questionnaire and the reasons why I chose to ask them. Questions 1 & 2: What gender are you? and How old are you? These questions give us some personal information on the respondents which will enable us to match their responses against their profile, which may be useful information. Question 3: How often do you purchase fast food? Choice: Very often, often, occasionally, seldom, very rarely, never) This question shows the attitude of the respondent to fast food and therefore whether they are regular purchases. This question can also be reflected in the answers to questions 1 and 2 to show how this opinion changes according to age. Question 4: If you answered "very rarely" or "never" to Q3, what puts you off purchasing fast food? Choice: Taste of food, unhealthy, too much advertising, too expensive, bad service, no local outlet, other This question enables us to find out why the people who are not regular McDonald's customers do not purchase their products, and therefore show the areas that McDonald's needs to improve on. ...read more.

Although 100 people is quite a large number for a survey of this type, it is not really enough to reach a firm mandate for presenting the evidence as the 100 people sampled may not be representative. Increasing the number of surveys sent out to about 500 would help to reach a firmer and more justifiable conclusion. Another problem was that there was not an even distribution between the personal details of the respondents which may have prejudiced them in some ways. It would have been better to have split these up into equal groups of age and gender (eg 10 males aged 0-10, 10 males aged 11-20 and so on) to make the findings more "stratified". The use of a survey also meant that it was not possible to ask more structured or detailed questions. There were some problems with the responses to the questions which may have meant that the proportions in the answers were not accurate. For example, Question 7 asked respondents where they had seen McDonald's adverts, one of the responses to which was "Internet". Twelve people said that they had. However, this is assuming that everyone who answered the questionnaire has Internet access, which is probably not true as only about 7% of UK homes are connected. This makes this result suspect. There are also some contradictions in the results which could cast further doubt over them. The overwhelming reason why people avoided McDonald's was due the taste of the food, yet hardly anyone had heard of a healthier alternative, the Arch Deluxe. Another contradiction occurred when 60% said that they used McDonald's most often yet only half thought it had a good public image. Despite these shortcomings, I believe that the research that I conducted was of a good standard and it is justifiable to use it for a conclusion such as the one reached above. However, it could be improved by sampling more people, in a more detailed and stratified way and by thinking more about the questions asked. Business Studies Coursework 2 Page - 2 - ...read more.