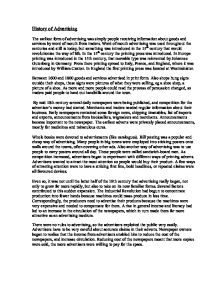 History of Advertising The earliest form of advertising was simply people receiving information about goods and services by word of mouth from traders. Word of mouth advertising was used throughout the centuries and still is today, but something was introduced in the 15th century that would revolutionise the way of life. In the 15th century the printing press was introduced. In Europe printing was introduced in the 15th century, that movable type was reinvented by Johannes Gutenberg in Germany. From there printing spread to Italy, France, and England, where it was introduced by William Caxton. In England the first printing press was located at Westminister. Between 1600 and 1800 goods and services advertised in print form. Also shops hung signs outside their shops, these signs were pictures of what they were selling, eg a shoe shop, a picture of a shoe. ...read more.

Advertisers wanted to attract the most attention so people would buy their product. A few ways of attracting attention were to have a striking first line, bold headlines, or repeated claims were all favoured devices. Even so, it was not until the latter half of the 19th century that advertising really began, not only to grow far more rapidly, but also to take on its now familiar forms. Several factors contributed to this sudden expansion. The Industrial Revolution had begun to concentrate production into fewer hands because machines could mass-produce in less time. Correspondingly, the producers need to advertise their products because the machines were very expensive and needed to compensate for them. A rise in general income and literacy had led to an increase in the circulation of the newspapers, which in turn made them far more attractive as an advertising medium. ...read more.

The advertising industry has grown since the 1930s. People are now employed to analyse people's lifestyles, dream and needs according to their social class, or geographical area. Increasingly sophisticated research methods mean that advertisers can now tell manufacturers what kinds of goods they could be selling, and their market opportunities. Advertising now creates new uses, needs and wants, so new products can be manufactured. Advertising has become much more of a science. Advertisers now know how far more accurately where and how to advertise, and also which type of media to use. There are more varieties of advertising, such as newspapers, magazines, billboards, radios and of course TV. Since TV was invented it has become the most popular and powerful means of advertising. Colour TV, satellite, cable channels and video have each changed the shape and form of marketing techinques, and have made advertising part of our domestic and social lives. ...read more.