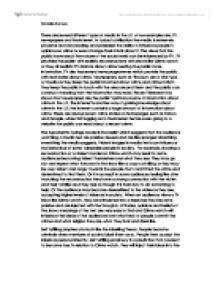 How crime is represented in the Media

There are several different types of media in the UK. A few examples are; TV, newspapers and the internet. In today's civilization the media is extremely powerful and very leading and possesses the ability to influence people's opinions on crime or even change their minds about it. The views that the public have about the nature of the social world can be influenced by TV. TV provides the public with realistic reconstructions with shows like Crime watch or they air realistic TV dramas about crime feeding the public more information. TV also has several news programmes which provide the public with real stories about crime. Newspapers, such as 'The Sun' are a vital type of media as they keep the public informed about crime and crime statists', they keep the public in touch with the area around them and the public can construct meaning from the information they read. Recent Research has shown that newspapers are the public's primary source of information about crime in the UK. The internet is another way of gaining knowledge about crime in the UK; the internet contains a huge amount of information about crime. ...read more.

The airing of the cute pictures drills the stories into the minds of the audience. The crime is sensationalized. Crimewatch also tend to label all rapists as evil and psychopaths, although the majority of victims are raped by people they know and trust and sometimes even live with. This gives the wrong idea to the audience. The way that the media report crime tends to lead to an inappropriate response by society and the government because the issue has been hugely misled. It makes the audience afraid to walk out their front door, not that they are safe in their own home either, when the reality is, crime rates are falling. The Deviance Theory explains that deviance is any type of behaviour or action that violates social norms. Crimewatch and the media shape the audiences views and opinions on who is considered as deviant. A criminal who did something considered deviant today, may not have been considered deviant 100 years ago.. To some audiences from different cultures what the criminal did may not be considered deviant to them, it may have been normal in their country, but the programme and the media have now changed their thinking. ...read more.

The result of this political influence is the emergence of ideologies around certain races. For example, an Asian may be labelled on the show as an offender, because Asians are a minority, this has created an ideology that all Asians are 'dangerous'. The programme links stereotypes such as Muslims, the poor, lower classes and immigrants to crime and often links them to specific types of crimes. This is going to result in violence or hatred towards those certain groups. The viewers of the programme, especially if they are people from these groups, they may feel offended and may feel as though they are now at risk and may fear for their safety. Crimewatch could be said to be cathartic in its nature, especially to women viewers who instead of watching and being nervous over fear of becoming a victim, watching Crimewatch can help them and other venerable people in society deal with their fear of crime. They can deal with their fear through Crimewatch by confronting the horrible crime by watching and witnessing the reconstructions in the comfort of their own home where they feel safe. Crimewatch empowers people so they can address their victimisation; it makes them feel more powerful. ...read more.