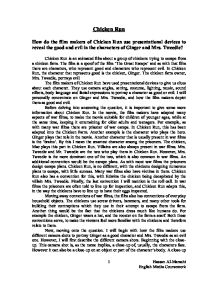 How do the film makers of Chicken Run use presentational devices to reveal the good and evil in the characters of Ginger and Mrs. Tweedie?

Chicken Run How do the film makers of Chicken Run use presentational devices to reveal the good and evil in the characters of Ginger and Mrs. Tweedie? Chicken Run is an animated film about a group of chickens trying to escape from a chicken farm. The film is a spoof of the film 'The Great Escape' and as with that film there are characters, who represent good and characters who represent evil. In Chicken Run, the character that represents good is the chicken, Ginger. The chicken farm owner, Mrs. Tweedie, portrays evil. The film makers of Chicken Run have used presentational devices to give us clues about each character. They use camera angles, setting, costume, lighting, music, sound effects, body language and facial expressions to portray a character as good or evil. I will personally concentrate on Ginger and Mrs. Tweedie, and how the film makers depict them as good and evil. Before delving into answering the question, it is important to give some more information about Chicken Run. In the movie, the film makers have adapted many aspects of war films, to make the movie suitable for children of younger ages, while at the same time, keeping it entertaining for older adults and teenagers. For example, as with many war films there are prisoner of war camps. In Chicken Run, this has been adapted into the Chicken Farm. Another example is the character who plays the hero. ...read more.

Mrs. Tweedie has very masculine features and the many close-up shots of her highlight those features, which also portray her as evil, compared to Ginger's warm feminine features which portray her as good. Another shot, which is used on Mrs. Tweedie, is the mid angle shot. However, this shot is used to concentrate on her from waist to neck, unlike the chickens, where it is from waist to head. This shows the reader how big Mrs. Tweedie is, and also shows her lack of womanly characteristics, breasts in this case. This again makes the reader feel less warmth towards Mrs. Tweedie. Leaving camera shots behind, I will now concentrate on the setting of each scene and how it is used to depict Mrs. Tweedie as evil and Ginger as good. Starting with Mrs, Tweedie this time. There is one main feature with the setting around Mrs. Tweedie throughout the movie. Whenever, Mrs. Tweedie is indoors it is dark, with little light, and this gives the reader the impression that she is a cold person, and pushes home the evil message. Then, when Mrs. Tweedie is outdoors, the sky behind her is always dark, or overcast. This gives the viewer the impression that the sky is afraid of her in a sense and it again pushes home the evil message from the film makers. Moving onto Ginger and the rest of the chickens. The movie begins and there are camera shots that show the setting the chickens are in. ...read more.

Tweedie there is fear on their face. This shows that they are afraid of her, and again highlights her evilness. A third point would be that when Mrs. Tweedie is inspecting the chickens in the roll call she does so while marching with a whip in her hand. The body language here projects superiority and coldness which depicts her as evil. The final point to make would be that like in many war films good triumphs over evil at the end. So, when Mrs. Tweedie sits with her arms slumped at the end, her body language shows defeat, which means the chickens were good and they triumphed over her, which means she is evil. In conclusion I would like to say that I have learned, from Chicken Run, that movies are not just about action and the different characters of a movie. There are many different techniques which film makers use to subtly tell us about a character's personality. Also as you would have noticed, instead of saying how the film makers projected Ginger as good, I answered how they projected Ginger and the rest of the chickens as good. I did this because I noticed that they used the same techniques on Ginger as with the other chickens. Hopefully now, after learning about film language and different presentational devices, I will now find it easier to recognize whether a character is good or evil in other movies, and maybe even enjoy the film more because I can recognize the different methods. 1 Hassan Al-Marashi English Media Coursework ...read more.