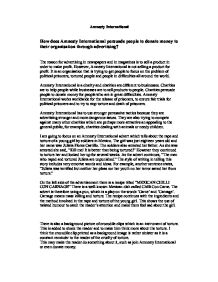 How does Amnesty International persuade people to donate money to their organisation through advertising?

On the left side of the advertisement there is a recipe titled "MEXICAN CHILLI CON CARNAGE" There is a well-known Mexican dish called Chilli Con Carne. The advert is therefore using a pun, which is a play on the words 'Carne' and 'Carnage'. Carnage means mass killing and torture. The recipe continues with the ingredients and the method involved in the rape and torture of the young girl. This shows the use of twisted humour to catch the reader's attention and make them feel sad about the girl. There is also a background picture of crocodile clips which is an instrument of torture. This is added to shock the reader and to make him think more about the torture. I think the crocodile clip printed as a background image is rather sinister as it is a constant reminder to the reader of the cruelty of torture. ...read more.

I think it would be better to use more Rhetorical Questions, which would make people think more. Finally, the advertisement carries the famous Amnesty International logo, which is a burning candle surrounded by barbed wire. It appears on two places on the page advert and is eye-catching. When people see this picture they are interested to read the advertisement because they know the information will be quiet shocking. This logo symbolises Amnesty International in short. In conclusion the Amnesty International advertisement uses various techniques to persuade people to help their work. The technique that I think is the most effective is the title of the advertisement. It was a clever idea to write about someone being tortured in the form of a recipe. It is funny but this increases the shock value. Perhaps this advertisement could be even more effective if they were to use more pictures, perhaps a picture, which is even more horrific. ...read more.