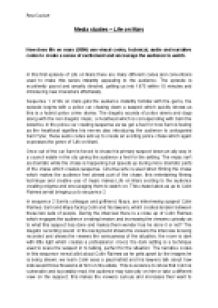 How does &quot;Life on Mars&quot; (2006) use visual codes, technical, audio and narrative codes to create a sense of excitement and encourage the audience to watch.

﻿Peter Crockett Media studies ? Life on Mars How does life on mars (2006) use visual codes, technical, audio and narrative codes to create a sense of excitement and encourage the audience to watch. In this first episode of Life on Mars there are many different codes and conventions used to make this series instantly appealing to the audience. The episode is excellently paced and smartly directed, getting us into 1973 within 10 minutes and introducing new characters effortlessly. Sequence 1 of life on mars gets the audience instantly familiar with the genre, the episode begins with a police car chasing down a suspect which quickly shows us this is a hybrid police crime drama. The diegetic sounds of police sirens and dogs along with the non diegetic music, a heartbeat which is corresponding with Sam the detective in the police car creating suspense as we get a feel for how Sam is feeling as the heartbeat signifies his nerves also introducing the audience to protagonist Sam Tyler, these audio codes add up to create an exciting police chase which again expresses the genre of 'Life on Mars'. ...read more.

The different audio codes used express Sams feeling for Maya as the non diegetic music plays softly whilst he cries and thinks about her, this corresponds with the visual codes creating a sympathetic feel for the protagonist making the audience pity him. Sam is unexpectedly struck by a speeding vehicle which brings me to sequence four. Sam is struck very unexpectedly and this may have came as a shock to the audience, the accident is very unexpected and this is done deliberately to shock the audience as this scene is key to the viewers as it is where the storyline unfolds as after this it is based in 1973, where Sam time travels back in time. The diegetic sounds used are very impacting, when the car hits Sam, initially there is a loud sound to signify he has been hit, after this all that can be heard is silence which corresponds with how the audience will feel, as they will be shocked at what has just happened. This creates enigma and increases the viewers curiosity to keep watching and they are now introduced to how Life on Mars is going to take place. ...read more.

Sam becomes increasingly convinced that he truly is in a coma, and that none of this world is real. he believes it is all part of his imagination. These are some of the ways in which Sam portrays his feelings to the audience during this sequence. Which allows the audience to get to know Sam and begin to have a feel for his character encouraging them to continue to watch Life on Mars. Later Sam meets a young police officer named Annie Cartwright who he begins to open up to and express his opinion and at one point tells her "I had an accident and when I woke up, I was here. Only here is 33 years in the past. Now, that either makes me a time-traveller, a lunatic, or I'm lying in a hospital bed in 2006 and none of this is real." This quotation of what he says gives the audience insight into how he feels about the whole situation, this again allows the audience to engage with Sam and feel what he is going through, the audience will grow a certain like for Sam and this creates a sense of excitement and encourages the audience to continue to watch "Life on Mars". ...read more.