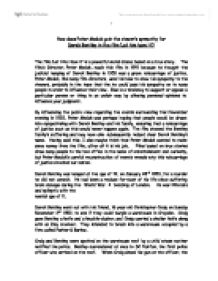 How does Peter Medak gain the viewer's sympathy for Derek Bentley in the film 'Let him have it'?

How does Peter Medak gain the viewer's sympathy for Derek Bentley in the film 'Let him have it'? The film 'Let Him Have it' is a powerful social drama based on a true story. The film's Director, Peter Medak, made this film in 1991 because he thought the judicial hanging of Derek Bentley in 1953 was a grave miscarriage of justice. Peter Medak, like many film directors, used his bias to show his sympathy to the viewers, probably in the hope that the he could pass his sympathy on to many people in order to influence their view. Bias is a tendency to support or oppose a particular person or thing in an unfair way by allowing personal opinions to influence your judgment. By influencing the public view regarding the events surrounding this November evening in 1952, Peter Medak was perhaps hoping that people would be drawn into sympathising with Derek Bentley and his family, ensuring that a miscarriage of justice such as this would never happen again. The film showed the Bentley family's suffering and may have also subsequently helped clear Derek Bentley's name. Having said this, I also maybe think that Peter Medak wanted to make some money from the film, after all it is his job. Films based on true stories draw many people to the box office in the name of entertainment and curiosity, but Peter Medak's careful reconstruction of events reveals why this miscarriage of justice shocked our nation. ...read more.

He is shown as an inoffensive boy who is very family oriented and able to deal with life in its ordinary aspects. However, he is portrayed as being incapable of standing up to his friend Craig. The film makes us feel sorry for Bentley and puts us on his side. This is done by focusing on Bentley as the main character. Christopher Craig is shown as the conventional "baddie" in the film and is seen to lead Bentley into doing wrong. The introduction of Craig into the film is quite the typical entry of an evil, mischievous character, so the audience immediately knows that he is the villain at first sight. Peter Medak builds a case that leaves no doubt in the viewers mind that Bentley should never have been tried. Peter Medak follows Bentley's life episodically from the time he was buried alive as a child in building rubble during the bombing of London. An experience that that Peter Medak implies caused Bentley brain damage and/or epilepsy. This is an effective opening because it builds up tension and heads toward building up the viewers' sympathy towards the child Bentley, as he suffered from such terrible injuries. From the very beginning of the film, Peter Medak builds a portrait of an affable young man who needed medical help much more than the death penalty. The scenes on the roof also lead the viewers to sympathise with Bentley as he is shown as weak and very vulnerable. ...read more.

The bruises on Bentley heighten the viewers sympathy towards Bentley and also make him appear more vulnerable. As the camera continues to close in on Bentley the viewers can hear his increasingly tense breathing and nervousness and see his eyes darting rapidly around the room. The director has done this in order to show the audience how weak, frightened and vulnerable Bentley really is. The fact that he is crying also shows the audience how child-like he is. The story on which the director Peter Medak based this film was dramatic and a low point of British justice. Derek Bentley was the only person ever executed in England despite a jury's recommendation of mercy. The public outcry over the case was instrumental in England's decision to abolish capital punishment in the mid 1960's. The defense position at the trial was that Bentley never uttered the words "let him have it." The defense argued that the police realized that Craig was too young to hang, and so concocted the story to implicate Bentley in the killing. In the mid-1990's, the English government formally apologized to Bentley's family for executing a brain-damaged person. In the late 1990's, an examination of the police file revealed that the police officer committed perjury. Bentley never shouted, "Let him have it, Chris." There have been many films about capital punishment. They all convey the same message: no matter what arguments can be made in its favour, if the law makes a mistake, an innocent life is lost. Few lives were more innocent than Derek Bentley's. 1 ...read more.