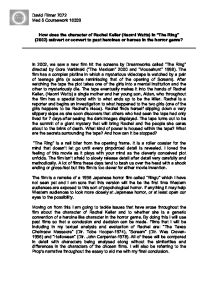 How does the character of Rachel Keller (Naomi Watts) in &quot;The Ring&quot; (2002) subvert or convert to past heroines or heroes in the horror genre?

How does the character of Rachel Keller (Naomi Watts) in "The Ring" (2002) subvert or convert to past heroines or heroes in the horror genre? In 2002, we saw a new film hit the screens by Dreamworks called "The Ring" directed by Gore Verbinski ("The Mexican" 2000 and "Mousehunt" 1998). The film has a complex plotline in which a mysterious videotape is watched by a pair of teenage girls (a scene reminiscing that of the opening of Scream). After watching the tape the plot takes one of the girls into a mental institution and the other to mysteriously die. The tape eventually makes it into the hands of Rachel Keller, (Naomi Watts) a single mother and her young son, Aidan, who throughout the film has a special bond with to what ends up to be the killer. Rachel is a reporter and begins an investigation to what happened to the two girls (one of the girls happens to be Rachel's niece). Rachel finds herself slipping down a very slippery slope as she soon discovers that others who had seen the tape had only lived for 7 days after seeing the dark images displayed. The tape turns out to be the summit of a giant mystery that will bring Rachel and the people she cares about to the brink of death. What kind of power is housed within the tape? What are the secrets surrounding the tape? And how can it be stopped? "The Ring" is a nail biter from the opening frame. It is a roller coaster for the mind that doesn't let go until every pinpointed detail is revealed. I loved the feeling of this movie as it plays with your mind as the cleverly conceived plot unfolds. The film isn't afraid to slowly release detail after detail very carefully and methodically. A lot of films these days tend to bash us over the head with a shock ending or gross-fest but this film is too clever for either movie invention. ...read more.

Rachel shakes, looks scared, runs out of the cabin and all thought she has just been told she's got seven days to live, she follows the convention exactly! On screen titling is used in the next scene to show the time scale, "Thursday, Day 1" is used to show where about we are in the film. As Aiden is walking to school, he bumps into a strange man in the street; they make eye contact but walk on. We later find out that this man is what I think is the closest person bar Aiden in Rachel's life, Noah. The shot cuts to Rachel opening the door and here we get the first shot of Noah's face in a complete portrait. This could relate to Props narrative in which the hero/heroine has a helper, in this case Noah. Noah and Rachel play around with the camera, another detail in which leads to the secret behind the tape. When Noah mentions the tape, we see Rachel again shown in a negative representation of women, shaky, nervous looking, and the clothes and make up she is wearing makes her to look like she is a weary position. But we know what power possesses in the tape at the moment, and Rachel seems to know a fair deal now, and she still lets Noah watch it. She seems to give in and again this does not show a positive representation. But after this we find out a small part of Rachel's past showing her in what I think, the most positive we see in the whole film. Rachel asks the question of whether she is "gullible, and easily rattled" to which Noah replies "no" to both. 3 Rachel then starts to unravel some more of the story line, in which she wants to find out where the tape came from, and who made it. So relating back to the question, so far through the duration of the film, I feel that we have quite an even balance to whether the character of Rachel is subverting or converting to the conventional heroine which is quite interesting. ...read more.

We then find ourselves near the end in which Noah is finally killed by Samara and the spirit of the tape. Rachel tries to stop this all happening but is unfortunate and too late. We see that she cannot save her friend from being killed, showing her as slightly weaker once again, may be a subvert? She does not have the strength either to tell Noah's roommate and lets her find him in his state by herself. When Rachel returns to her apartment, we see her break down, but also because of the state she is in, finally solve what is the mystery. By copying the tape, you are freeing her more and saving yourself. This again shows Rachel in a positive light and represents her as a strong-minded character. So in conclusion to my main question of "How does the character of Rachel Keller (Naomi Watts) in "The Ring" (2002) subvert or convert to past heroines or heroes in the horror genre, I believe that we have a balance of both sides of the argument in which I have clearly shown above. I feel that conventions are in place because that is what the audience expects and has grown to be accustomed to. If these were completely taken away I feel that the film would not make sense, change the audiences opinions, and that's not forgetting what the critics would say! So, "Scream", "Halloween" and "Texas Chainsaw Massacre", all play with conventions but do not really change them, whereas Rachel Keller, along with "The Ring", play with the audiences expectations and change them ever so slightly. I mean throughout the film we think Rachel will be killed by the evil in Samara but she doesn't and not only that she defeats it. I believe that "The Ring" was such a cleaver film, unraveling every single detail at the exact correct moment. "The Ring 2" is current in pre-production development also starring Naomi Watts and is sure to be a blockbuster hit. ...read more.