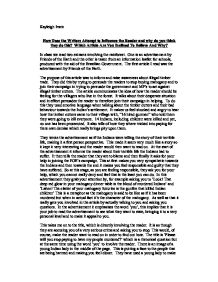 How Does the Writers Attempt to Influence the Reader and why do you think they do this? Which Article Are You Inclined To Believe And Why?

Kayleigh Irwin How Does the Writers Attempt to Influence the Reader and why do you think they do this? Which Article Are You Inclined To Believe And Why? In class we read two extracts involving the rainforest. One is an advertisement by Friends of the Earth and the other is taken from an information leaflet for schools, produced with the aid of the Brazilian Government. The first article I read was the advertisement by Friends of the Earth. The purpose of this article was to inform and raise awareness about illegal timber trade. They did this by trying to persuade the readers to stop buying mahogany and to join their campaign in trying to persuade the government and MP's to act against illegal timber cutters. The article communicates the idea of how the reader should be feeling for the villagers who live in the forest. It talks about their desperate situation and in effect persuades the reader to therefore join their campaign in helping. To do this they used emotive language when talking about the timber cutters and their bad behaviour towards the Indian's settlement. It makes us feel shocked and angry to hear how the timber cutters came to their village with, "16 hired gunmen" who told them they were going to kill everyone. ...read more.

The picture is in black and white to make the picture darker and sombre. This additionally adds to the overall solemn tone, which conveys the sad feeling. All together I feel that this advertisement has made me feel very involved, sympathetic and that it would be wrong of me to buy mahogany again. This tells me that they have been very successful in writing this advertisement even though they have not written much about the timber cutters views. This makes me unsure about the information they have supplied, as there is no evidence to back it up. I feel this has been well structured and done to good effect, as it makes you feel so sympathetic and guilty before it actually asks for your help. The next article I read was from an information leaflet for schools, produced on the behalf of the Brazilian Government. The purpose of this article is to persuade the reader that it is ok to use the rainforests as a resource and for us not to worry. It informs us about the moves that are being taken by the Brazilian Government and justifies its position. ...read more.

It did inform you with a lot of information but I did not feel that it had been well structured. Overall I think that it is quite clear that I found the first article which was an advertisement by friend of the earth much more likeable. I thought that a lot more persuasion had been put into the friends of the earth article even though there was not much evidence to back it up. I felt more interested in this article and that it drew my attention to the article straight away. When reading the second article from an information leaflet I bored and angry. I felt bored due to the fact that it was not griping or intense and angry due to the fact that it tried to cheat the reader. The tone of the first article was very sombre which made me feel sorry and more attached to this article. The tone of the second article was very authoritative which does not make me feel close to the article as the first one did. I felt much closer to the first article as the picture helped me know what kind of people lived there. So in addition to everything I feel that the first article which was an advertisement by friends of the earth was the most successful in persuading me. ...read more.